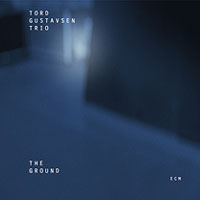 When Norwegian pianist Tord Gustavsen's trio emerged on the scene in '03 with its ECM debut Changing Places, it was an odd phenomenon. On first glance it was so subtle— almost too subtle—that it felt somehow underwhelming. And yet, over time, it revealed a charm, graceful beauty and slight melancholy that became more and more compelling with each listen. Working with short, song-like miniatures and a distinctive ambience that truly breathed, Gustavsen, bassist Harald Johnsen and drummer Jarle Vespestad examined the nooks and crannies of a specific mood and tempo, revealing a remarkable breadth of feels and thematic ideas.

Two years later, and with considerable touring behind it across Europe and North America, the Tord Gustavsen trio is back with The Ground, an album that continues to explore similar areas of musical space. But while Changing Places was an exquisitely quiet album, The Ground—while hardly raucous— has a greater energy. And Gustavsen's roots in gospel and the nexus between Caribbean music and New Orleans jazz are in even stronger evidence this time around.

The trio also continues to give virtuosity a back seat to melodic development. There are momentary glimpses into the players' formidable abilities—a line here, a flurried passage there—but understatement continues to be the order of the day.

There is a line that runs through the entire programme of Gustavsen compositions that implies a larger narrative intent. "Tears Transforming," "Being There" and "Curtains Aside," while having distinct themes, also share a similar harmonic foundation. Clearly, as with Changing Places, Gustavsen is intent on mining the wealth of rhythmic subdivisions and harmonic breadth possible within what some might consider a restricted space. But for Gustavsen, medium tempi and specific musical textures are not confining—rather, they provide infinite possibilities if one is only prepared to look.

Vespestad, a drummer with a sound like no other, continues to demonstrate the dynamic breadth that made his playing on Changing Places so stunning in its restraint and delicacy. There are times when it feels as though Vespestad isn't so much hitting the drums as breathing on them—this, in stark contrast to his work with the electronic group Supersilent. And yet, on The Ground he exhibits a broader range, from slight hints of New Orleans second-line on "Curtains Aside" to a brighter attack on "Twins." Johnsen has the uncanny knack of always being in the right place at the right time, with never a note wasted.

Gustavsen, too, is not one for superfluous demonstration. With a sensuous style that is, at the same time, direct and concise, he takes his musical roots and removes all sharp edges, lending them a softer disposition.

Affirming the promise of Changing Places, The Ground is another album of elegantly subtle miniatures that, unsurprisingly, takes its steps forward gently and with care, yet doesn't sacrifice the all-important element of risk that gives it its life and sophisticated energy.

Tears Transforming; Being There; Twins; Curtains Aside; Colours of Mercy; Sentiment; Kneeling Down; Reach Out and Touch It; Edges of Happiness; Interlude; Token of Tango; The Ground