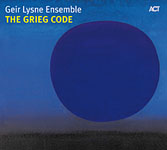 The Norwegian aesthetic for large ensembles is often considerably distanced from the American tradition, though there are mid-Atlantic meeting points, with Mariah Schneider and Darcy James Argue finding some common ground with Jon Balke, Trygve Seim and Geir Lysne. Lysne, in particular, has managed to combine a greater predilection for overt soloing within oftentimes expansive, detailed compositions. The Grieg Code is his fourth album for the ACT label, and it's a logical successor to earlier releases while, at the same time, breaking some new ground.

With his smallest ensemble yet—though, at 13, still a sizable group with plenty of musicians doubling or tripling to provide Lysne a broad sonic palette—it's his first album to also feature the composer/conductor as an instrumentalist. "Døse Dås" is a miniature for his soft, breathy tenor—a brief interlude between more cinematic compositions, providing a distinctive yet somehow indefinable Norwegian ambience. Of course, with the music all based on that of Norwegian classical composer Edvard Grieg but radically reworked into original compositions by Lysne, it's no surprise that there's more than a hint of Nordic cool. Lysne's compositions cleverly take snippets of music by Grieg and significantly rework them into forms unrecognizable—except, at best, to the well- versed Grieg fan. As Lysne explains, "A lyrical soprano line became a cool bass line, three octaves down and in reverse."

While a Nordic vibe imbues Lysne's music, there's no shortage of fire to contrast with the ice. The genre-busting "Vebburedon" features saxophonist Tore Brunborg—last heard on his own Lucid Grey (DRAVLE, 2009)—on an increasingly intensifying solo that begins over a spare pulse created by horns and percussionist Terje Isungset's Jew's harp, but gradually gains weight when the rhythm section—bassist Bjørn Kjellemyr, an alumnus of guitarist Terje Rypdal, and drummer Andreas Bye, a past member of Bugge Wesseltoft's New Conception of Jazz—enter to provide a more rock-steady rhythm.

Lysne is a broad colorist, over whom the spirit of the late Finnish composer/drummer Edward Vesala—also a strong reference point for Seim—looms large, especially on the tone poem "Wonde Hinsisi," where dense horns and turbulent, low-end percussion create a simmering chaos beneath Eckhard Baur's plaintive voice and panning trumpet. He's also a cultural cross-pollinator, with Brunborg's lyrical Irish flute opening "Glossi Vangse." A pedal tone sets the foundation for a horn arrangement that elegantly references another great composer/arranger, Vince Mendoza, before a cacophony of voices over marshall drumming lead to a set of odd-metered changes and a baritone solo by Steffen Schorn that begins in warm-toned, John Surman territory, but ultimately turns brasher and more free, finally fading to black.

That Lysne has so many releases under his belt—some recorded at the legendary Rainbow Studio in Oslo, all recorded, mixed and mastered by the studio's equally famous engineer, Jan Erik Kongshaug, for crystalline transparency—yet remains a lesser-known name than many of his contemporaries deserves to be changed. The engaging and creative large ensemble music of The Grieg Code is the perfect entry point to this remarkable composer/bandleader.