BY BRUCE LINDSAY
October 25, 2009
Sign in to view read count 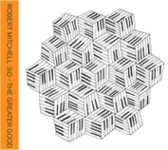 The Greater Good was declared the "Best Jazz Album of 2009" by influential British DJ Gilles Peterson. At a time when piano trios seem to be enjoying a resurgence such an accolade might be hard to live up to in the face of some stiff competition, but this album's combination of original tunes, inspired covers, and fine musicianship makes it a worthy award winner.

Although pianist Robert Mitchell has been around the British jazz scene for some years, leading Panacea and working as a duo with violinist Omar Puente for example, this is his first trio album. Mitchell is a thoughtful, almost introspective, musician with an academic training in classical music at London's City University and a wide range of experience across different styles of jazz. His playing is lyrical and spacious—displays of technique are always secondary to emotional connection—and in a trio setting this approach offers plenty of chances for other musicians to shine. Bassist Tom Mason and drummer Richard Spaven take those chances and demonstrate the 3io's strength as an ensemble.

All of the musicians contribute tunes to the album, although Mitchell takes the lion's share. His 5 compositions are characterised by a reflective quality: "Cumulus" combines piano and bass to create a real evocation of the movement of such cloud formations, while "The Blessing" is a particularly beautiful track, with Mitchell displaying a light and economical touch throughout.

Spaven's contribution, "Greater Good," is co-written with Dutch musician Vincent Helbers. As well as giving Mitchell the inspiration for the album's title the track also closes the album in style, with the broken, spiky, rhythm of the drums and bass moving the tune along while Mitchell plays with a harder edge than usual.

Of the three covers, Massive Attack's "Teardrop"—from Mezzanine (Virgin, 1998)—is the most familiar and the most immediate. Mason is the standout performer on this track, taking on the vocal melody line of the original by firstly plucking the strings of the bass then by bowing them. In the final minute Mason plays in the upper register of the bass, creating an at times disquieting sound to draw the tune to a close. The 3io also performs Wayne Shorter's "Dance Cadaverous"—from Speak No Evil (Blue Note, 1965). It's taken at a similar tempo to the original, but Spaven and Mason give it an urgency and drive that contrasts with the more laid back rhythm of Shorter's version.

This album displays an array of talents: musicianship, compositional ability, and a knack for selecting and arranging out of the ordinary but inspired covers give the band plenty to build on for the future. The Greater Good is a confident and mature album and it will hopefully be the first of many recordings by the Robert Mitchell 3io.