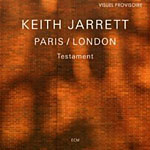 For fans, music critics, and musicians, the music of pianist Keith Jarrett can be like a dopamine release in the brain. Like any pleasurable activity —sex, drugs, food—listening to Jarrett's music releases a neurotransmitter chemical in the brain that reinforces the pleasure systems of the body. Pick any spot in his nearly 50-year career and fans will tell you about their first encounter and the visceral response they had to his music. For this writer, it was Bop-Be (Impulse!, 1977), but for others, The Köln Concert (ECM, 1975), or, gulp, the marathon ten-LP (now six-CD) Sun Bear Concerts (ECM,1978) as their initiation into Jarrett's music. Along the length of his career, devotees continually search for that pleasure response they first had with Jarrett's music.

The two nights that make up Testament - Paris / London fire off large doses of brain chemicals, enough to satisfy the hardest, of hardcore fans.

The attraction here—and with all of Jarrett's original music—is his emotional effort. He is always able to convey feeling in his playing, from the fervid to the sentimental, the passionate to the giddy; or maybe, perhaps, those are just listener responses to his playing.

As explained in Jarrett's liner notes, his return to solo improvisation has come at the expense of some very important assets (his health and his wife), and that effort is evident across these three discs. Following the critically acclaimed concert recordings Radiance (ECM, 2005), from Japan in 2002, and The Carnegie Hall Concert (ECM, 2006), from New York in 2005, Testament excels in breadth of playing and range of passion.

Unlike the marathon pieces he attempted in the now-distant past, these tracks—all simply numbered and ranging from just under four minutes to nearly fourteen—are dense, consumable brilliance. Maybe the effects of the chronic fatigue syndrome are still with him, but these smaller blocks of improvisation clearly demonstrate Jarrett's enthusiasm for playing. He seems to be reacting more to the audience's response and presence, playing into the attendees' desire to make these shows a positive and supportive experience.

Jarrett's streams of consciousness include classical, jazz, free improvisation and touches of gospel. His physical playing—seated, standing, hovering face nearly touching keys—are all parts of this singular individual's expression of his soul, and, indeed, supplies plenty of those dopamine brain chemicals.