By Larry Taylor
September 23, 2011
Sign in to view read count 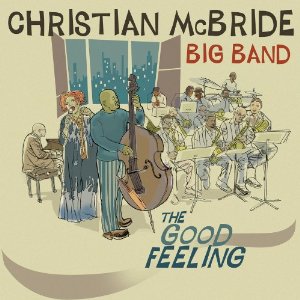 With all that Christian McBride has accomplished in his 30 year jazz career, The Good Feeling is his first recording fronting a big band.

This formidable bassist has had a versatile career as leader, sideman, composer and arranger; he has appeared with a galaxy of star players from jazz, as well as rock and pop; and has been commissioned to write for orchestras and festivals.

The album starts out with the temperature up on "Shake 'n Blake." As the title suggests, McBride wrote this for Blake, who obliges with a crisp solo. McBride's bass is out front and prominent here, as it is on most numbers.

The venerable Count Basie style is given homage in the bouncy favorite, "Broadway." On another chestnut, "I Should Care," McBride helps to tease out the familiar melody in a delightful manner. The song then becomes a showcase for trumpets and saxophones.

McBride's "Science Fiction" is an almost 12-minute tone poem, effectively suggesting the otherworldly: the piano, a ticking clock; the woodwinds, precursors of all that's alien.

The closing "In a Hurry" is accelerando con brio, with saxophones and trombones turned loose. McBride's bowed bass leads into in an unfettered ending, with a call-and response unleashing a dynamo of drums at the finish.

McBride should keep this band in his phone directory, bringing them together for more recordings and appearances. His orchestra should be listed alongside other ensembles, the likes of the Clayton-Hamilton Jazz Orchestra, the Maria Schneider and the Vanguard Jazz Orchestra.