By Greg Simmons
December 17, 2015
Sign in to view read count 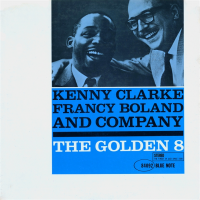 The first time I dropped a needle on a Music Matters 33 rpm test-pressing of Kenny Clarke and Francy Boland's The Golden 8 I was surprised to hear something quite unusual: a Blue Note record that was clearly not recorded in Hackensack.

With only a few exceptions, most Blue Note records of the 1950s and 60s were recorded in Rudy Van Gelder's New Jersey studio with a unique sound that many listeners can pick out in just a few bars. The stereo recordings in particular are hallmarked by horns that are hard-panned left and right, as well as an often pinpointed, sometimes muffled piano. They're great recordings but they have a very consistent and distinct sonic signature.

The Golden 8 is a very different Blue Note record. Captured in May of 1961 in Koln, Germany and released the same year, it was recorded by Wolfgang Hirshmann who recorded a long list of American jazz musicians visiting or living in Europe, as well as home-grown talent.

The result is unimpeachable sound quality without the period eccentricities found on other recordings of the same era. Instruments are placed naturally in an enormous soundstage with exceptional clarity.

Lest anyone think this is just some audiophile sonic extravaganza of mediocre music, rest assured: this Clarke/Boland band is top notch.

Boland is credited as composer on six of the ten numbers, five of which were written specifically for the date, and as the arranger for the rest. The compositions are well crafted but they also leave plenty of room for individual performers to shine.

The standout on this date is the under-appreciated tenor saxophone of Karl Drewo. Whether playing up-tempo or ballads, his playing is as good as any of his American peers of the era and he gets a lot of spotlight on this record. Also notable for a smooth, burnished performance is Chris Kellins on trombone (listed quaintly as Baritone Horn on the original jacket).

One other unusual characteristic of this record is how few times it's seen the light of day. The Blue Note catalog has been mined and reissued with varying degrees of care almost continually over the past four decades, but this record has rarely been pulled out storage. Discogs notes only two CD releases after the 1961 original, one of which was only issued in Japan, and even today it's still not available on the ubiquitous iTunes. Having spoken with Ron Rambach of Music Matters, it took him several years to secure permission from EMI for a long overdue reissue. His perseverance on this title is a boon for jazz fans.

Within the Blue Note catalog, with some mythically rare original pressings, The Golden 8 is another gem. Beautifully played and exceptionally recorded, it's absolutely worth seeking out for a listen.

Side A: La Campimania; Gloria; High Notes; Softly As In A Morning Sunrise; The Golden 8. Side B: Strange Meeting; You'd Be So Nice; Dorian 0437; Poor Butterfly; Base Cuite.