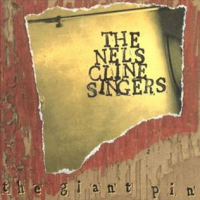 What is jazz? Improvisation is a big part of it, sure, but improvisation can be found in other genres. Is it an innate sense of swing? Maybe, but there are plenty of artists out there who are considered jazz artists and don't swing at all. Is it improvisation in a context where styles are cross-fused? Closer, but there are artists who stick faithfully to one clearly defined sub-genre and are absolutely pure in their approach. Guitarist Nels Cline and his current trio, the Nels Cline Singers, may do little to answer the question, but with their sophomore release, The Giant Pin , they continue to make improvised music that defies categorization. Captivating while, at times, more than a little disturbing, this is music not for the faint-at-heart, but with depth that demands attention.

Fearless in its scope from abstruse lyricism to complete abstraction, Cline's compositions are sometimes odd amalgams. "Blues Too" is harmless enough—outside, yes, and dark too—but with its clean approach and clever head, Cline mischievously draws us in. "Fly Fly" is next, with an elliptical theme that develops into a barely controlled free-for-all. "He Still Carries A Torch For Her" begins with an alt-rock theme that morphs into a delicate passage where bassist Devin Hoff's arco is surprisingly sweet. But it's a brief respite before drummer Scott Amendola introduces chaotic electronic chatter over a Bo Diddley bass drum beat. Cline begins a solo where he doesn't so much coax sound out of his instrument as tear it out, gradually building to a fever pitch.

Even when the group settles down into a semblance of tranquility, there is an air of danger. "The Ballad of Devin Hoff" gives Hoff an opportunity to step up and solo over guitar chords that might be considered tender if they weren't so inherently menacing. Still, it's a much-needed respite from the intensity, but by the time the piece is half over Cline has shifted into an Eastern-inflected theme that is filled with dissonance.

"The Friar" acts as an abstract electronic introduction to the extended "Something About David H.," where Cline solos over a dark and brooding backdrop of tuned percussion; this is as close to peaceful as things gets before becoming almost anthemic over a weightier rhythm section, with Cline's solo developing into a shredding climax.

Cline's influences are broad but completely integrated. One might pick out snippets of his roots, but no more; over a twenty-five year career he has developed a personal vernacular that is as much about texture as it is about thematic development. He has frightening technique but it is subsumed into a playing concept that is all about ambience—punishing to peaceful, relentless to spacious. The Giant Pin may be a challenging ride, but it is well worth the trip; it may not be jazz by strict definition, but in its fearless exploration of controlled anarchy it is clearly in a league of its own.

Visit Nels Cline on the web.

About The Nels Cline Singers