By Mark Corroto
November 1, 2000
Sign in to view read count 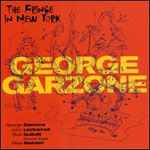 Sometime after the death of John Coltrane and before the rise of the conservative button-down star as repertoire performer, the influence that Trane had over jazz waned. It’s not that he was forgotten, but that his music required such a commitment from a musician that it must have scared away most by sheer intimidation. Within the past twenty years, musicians like Joe Lovano, Dewey Redman, Pharoah Sanders, David S. Ware, Roy Campbell, Julius Hemphill, and George Garzone have taken up the challenge and beauty of Coltrane.

In George Garzone’s case, Coltrane has never been far afield from his own voice. With his band (of 25 years), The Fringe, he exercised the more free improvisational aspects of Coltrane. As a sideman to Danilo Perez, Joe Lovano, George Russell, Gunther Schuller, Rachel Z, Jack DeJohnette, Billy Hart, and even Jamaaladeen Tacuma I always heard the Coltrane spirit in his playing. Garzone has always possessed an expansive warm tone that moves from inside to out-jazz with relative ease. Like Trane, his music resonates from what must be a warm and beautiful soul.

Garzone augments his Fringe trio with vibraphonist Mike Mainieri of Steps Ahead fame. Mainieri of late, has acted as producer and label chief for NYC Records and he recorded two glorious (Frisell-like) American Diary records which presents jazz as quasi-folk/classical music.

Let’s talk about how this disc opens and closes, it is of course bookended by Trane. Garzone’s composition “Tribute To Trane” starts this affair and a six-minute (by my count way too short) “Central Park West” ends it. In between Garzone delivers music of varied Coltrane influence, like the Dolphy-esque “Plus One” and a taste for the outside on “We Don’t Know Why.” Mainieri’s influence harkens back to the Blue Note sound, both the bop and post-bop of Bobby Hutcherson, even sounding like the piano of McCoy Tyner. Garzone knows the calm and the fury. He quells the thunderous drumming Bob Lockwood on “A Fox In The Woods” with a pacific ‘Stellar Regions’ saxophone chant and runs the energy jams down on “Ultra Tempo” in an expected (and anticipated) Fringe fashion.

Recorded in studio, this music begs for a live venue, extended soloing, and a voltage meter.

Tribute To Trane; Between Two Cities; Slip + Slide; Anthony Goes To Mardi Gras; Plus One; A Fox In The Woods; Ultra Tempo; We Don