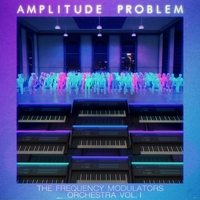 Sometimes it sounds like Juan Irming, credited here as Amplitude Problem, beams his music down from outer space. If that was the case, life elsewhere seems better than it does here as the songs on The Frequency Modulators Orchestra, Vol. 1 feel like they emanate from a happy place, free from socio-political distress and nuclear fears. Armed with synthesizers and an nostalgic affinity for '80s video game soundtracks, Irming conjures an artificial world of high-tech joy, pop music for Donkey Kong to jam to.

Irming developed Frequency as a concept album, showing how digital beats can capture the warmth of jazz, and true enough the iciness of his compositions nevertheless reveal human hands. "If I Had a Band (We'd Tour the World)" is a propulsive track that thrills like vintage electro funk. Irming has a strong feel for infectious hooks. This isn't just keyboards pumping noise; it is legitimately groovy. On "It's a Game," Irming revs up the throbbing synthesizers, echoing the innocence of '80s Atari childhoods.

Irming's jazz chops are fully unveiled on "It's Everything." It's as sleek and calming as smooth jazz but actually more soulful, ironically enough, in its computerized way. Maybe androids do dream of electric sheep.