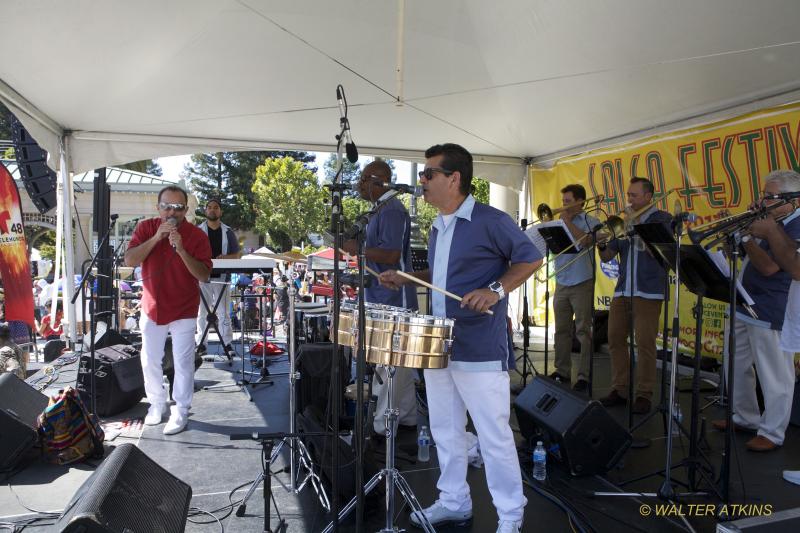 BY WALTER ATKINS
October 17, 2017
Sign in to view read count

We do love to throw in some danceable tunes though, simply because they’re fun to play and we love the energy from the crowd when we do.
&#151Brian Andres, leader of Brian Andres & The Afro Cuban Jazz Cartel

RCSF kicked off Friday night with the two-time Grammy winning Spanish Harlem Orchestra, a popular Salsa and Latin Jazz collective. They played at the historical Fox Theatre and smartly provided plenty of room for dancing couples in front of the stage. The big band has been performing their persuasive brand of New York salsa music for fifteen years. Based on the dancers' cheerful responses, SHO will easily be go to go for another fifteen.

The large Courthouse Stage was a sea of delighted people moving to the rich Afro Cuban polyrhythms of the different bands. When Montuno Swing mentioned the recent hurricane devastation to Puerto Rico and the outpouring of rescue help by families and individuals, the gigantic crowd demonstrated its undiminished empathy and solidarity for their home with uplifted hands and peace signs. This stage continued to fill the night with soothing salsa sounds long after the other stages had finished. RCSF's many benefactors included media sponsors Telemundo 48 (big thanks to Samuel Aguilar for the witness wear) and La Raza 93.3, Whole Foods, Chavez Market, Broadway Chevrolet, and Provident Credit Union.

Throughout the long day, the Reggae Stage consistently drew a good size audience that rocked steady to the island beat. The Bayonics came on after Mr. Mego, and they had people dancing and swaying to their songs. Encountered an affectionate couple that had recently connected through an online dating service. It was early in their budding romance and this was just the second date. He picked the first date location, and she picked the RCSF for their second outing. It sounded like a very democratic and pleasurable way to develop a new love connection. Wished the jovial pair well on their young adventure after the band finished. Who knew piquant salsa could also fuel a spicy romance?

On Saturday, the RCSF attracted people from all over the San Francisco Bay Area who loved it. Deniese, from Walnut Creek gave it high praise. "(The Redwood City) Salsa Festival is one festival I wait for all year long. The bands are fabulous and it seems to bring out the best in everyone. Dancing...good food. Fabulous music. What's not to love?"

Sonia, another East Bay attendee added her comments. "I came to the Salsa Festival last year and I was impressed, and this year wasn't disappointed either. The food-especially from the Puerto Rico stand, the drinks, and the atmosphere. Hope (the festival keeps) going so I could keep coming."

Drummer Andres, leader of Brian Andres and the Afro Cuban Jazz Cartel closed the Latin Jazz Stage and was a crowd pleaser. Andres' set for the show included: "Amyable," "Ixtapa," "Black Market," "Song For Chano," "Esto Puede Ser Eso," "Bugs on a Windshield," and "Estampa Cubana." Andres' novel arrangement of the Weather Report staple ,"Black Market," was one of my favorites from his extensive book. He definitely relished playing the accessible venue. "The Latin Jazz Stage at the RC Fest is one of my favorite places to play for numerous reasons. One being that we don't have to cater to the dance crowd. We're encouraged to focus on the "jazz" part of Latin jazz and the audience appreciates it as well. We do love to throw in some danceable tunes though, simply because they're fun to play and we love the energy from the crowd when we do."

The tenth annual Redwood City Salsa Festival was another fantastic display of music, culture, community, food and leisure presented by Redwood City Events. This was an excellent way to close out summer and prepare for fall. This free family event was teeming with contented visitors and booth vendors. RCSF also provided free parking, a nice courtesy other municipalities should take under consideration. Already looking forward to next year's festival.