The Nu Band: The Final Concert 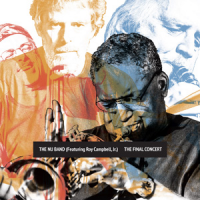 The title refers to trumpeter Roy Campbell's last appearance with the outfit he founded with drummer Lou Grassi twelve years before. Campbell died in 2014 at the age of 61, 21 months after this March 2012 live date from Bad Hofgastein, Austria at the conclusion of a European tour. This limited edition LP constitutes the seventh entry in the band's discography and affirms their credentials at the pinnacle of the free-bop game.

Both Campbell and reedman Mark Whitecage spent a lifetime grounded in the sort of spirited inside/outside workouts featured here, the trumpeter notably with Other Dimensions in Music, while the reedman's propensity to extemporize at the drop of a hat can be heard nowhere better than the brace of albums he made on the CIMP label in 1998 with Sun Ra Arkestra luminary Marshall Allen. Their lines intertwine symbiotically, but bounce back into sharp relief in an instant. Grassi and bassist Joe Fonda are similarly nimble, surefooted and connected.

As on previous discs, the repertoire predominantly revolves around blowing vehicles emanating from the pens of the participants, along with the occasional spontaneous group creation. Whatever the form, the merit of the pieces stands or falls on what the individuals bring to the party and the quality of the interplay. And that's a given with Whitecage's fluent husky- toned alto and Campbell's sliding between the notes legato, from growls right up to falsetto whinnies. The simple seesawing line of "Like A Spring Day" provides a prime example, as both horns revel in the swinging vamp, Whitecage even dropping in Monk quotes before the close.

Fluid interchange also proves the order of the day on the bassist's two part "In The Whitecage," firstly between the dedicatee's spiraling clarinet and Campbell's muted trumpet in the pensive opening and then with alto and flugelhorn joyfully harrying one another in the sprightly later section. A tumbling Grassi solo enables a practiced transition to Campbell's dirge-like "Lament For Billy Bang." In the final "Free Piece," horn fanfares and flourishes split the valedictory conversational exchange of blues figures between the front line, before a final surging exhortation by Whitecage.

Notwithstanding the retrospectively unhappy connotations, there's a good time feel to the performance, as it celebrates the group in its element. But this wasn't the end of the road for the Nu Band. The Cosmological Constant (NotTwo, 2015) with ICP alumnus trumpeter Thomas Heberer replacing Campbell, hopefully signals the start of a new chapter.

Like A Spring Day; In The Whitecage; Lament For Billy Bang; Free Piece.