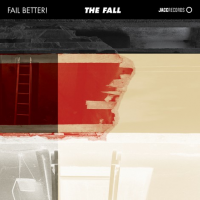 For its third album following Zero Sum (JACC, 2014) and Owt (NoBusiness, 2016), adventurous Portuguese improvising outfit Fail Better! presents selections from a 2017 concert in the city of Coimbra. Although the instrumentation remains the same, this time out drummer Marco Franco and Lisbon-based Catalan saxophonist Albert Cirera join core members trumpeter Luis Vicente, guitarist Marcelo Dos Reis and bassist Jose Miguel Pereira. Of the newbies, Franco is the more regular collaborator with Vicente, as can be heard on the excellent Deux Maisons (Clean Feed, 2015), to take just one example. But the plethora of connections between the five participants ensures a high degree of both empathy and cohesion.

Like its predecessors, The Fall reflects a collective vision which, while not quite selfless, nonetheless places individual contributions at the service of the overall feel, particularly Reis, who, like a chameleon, assumes whatever identity is needed to further the group ethos. Here, that feel often takes on an elemental quality like the ocean, barely changing at one level, but in continual flux when examined closely. Novel textures and extended techniques abound, especially with the horns as Cirera achieves no mean feat in matching Vicente for timbral invention.

"Ground Floor" provides an intense, uncompromising opening in which Cirera's circular breathed drone and Reis' rippling scrabble act as the connective tissue linking intermittent sonic flurries. After an appealing introductory exchange between Vicente's trumpet mutter and Cirera's soprano squiggles, a similar full-on vibe takes hold and pervades the closing "Down Under." Between times the interplay becomes more transparent, notably on the near pointillist "Falling Stars," as brass and reed plosives, Franco's warbling flute, and a litany of dry taps give way to a plaintive almost folkish air, bowed on either guitar or perhaps bass.

The tandem of Vicente and Reis lies at the heart of the band's sound, combining to great effect at the close of the same piece as tolling guitar chords punctuate the trumpet's airy groans. The pair also hit pay dirt on the spiky, jostling "Rise Up" engaging in a scuttling duet over Franco's clattering drums. But really, these are just illustrations of the sort of entertaining vignettes which crop up throughout, as the quintet masterfully finds new ways to operate and interact.

Ground Floor; Rise Up; Falling Stars; Skyfall; Down Under.