The Fairfield Four in Little Rock

The downtown Little Rock restaurant and performance space, South on Main, is the place where the Oxford American [A Magazine of the South] goes 'from the page to the stage.' The venue closed the 2015 Oxford American Concert Series with a spirited folk romp by The Indigo Girls, and properly inaugurated the magazine's 2016 Jazz Series with an appearance by The Victor Goines Quartet.

As part of the Oxford American's Archetypes & Troubadours Series, the gospel quartet The Fairfield Four were invited to perform. Founded in 1921 in Nashville, TN as part of the Fairfield Baptist Church, the Fairfield Four have carried their Word through three generations of singers, ensuring the fidelity and integrity of their art. Prior to winning the 2016 Grammy Award, the group received the 1998 Grammy Awards for Best Traditional Gospel Recording, I Can't Hear Nobody Pray and the 2002 Album of the Year for the O Brother Where Art Thou Soundtrack Recording, as well as, two Lifetime Achievement Awards. They were inducted into the Gospel Music Hall of Fame in 1999. In addition to their inclusion on the O Brother Where Art Thou soundtrack, the Fairfield Four has also recorded with John Forgery on "A Hundred and Ten in the Shade" from Blue Moon Swamp (Warner Brothers, 1997), Steve Earle on I Feel Alright (Warner Brothers, 1996) and El Corazon (Warner Brothers, 1997).

The Fairfield Four came to Little Rock on a humid and unseasonable warm late winter night, expressing eloquently Grace, Graciousness, humility, and Gratitude. As the Holy Object of their repertoire said, "But whoever would be great among you must be your servant, and whoever would be first among you must be your slave, even as the Son of Man came not to be served but to serve, and to give his life as a ransom for many" then The Fairfield Four have justly done so.

The evening was four-part, a cappella, black gospel music. The quartet took the stage and began to Sing. There was no vocal tune-up, no introductory note. They came out and tenor Bobbye Sherrell introduced "Hallelujah" and with a life of its own, the performance moved with an unearthly momentum as sure as Hawking's Time heading for that certain human singularity. Urbane, loquacious, ever humble, each member engaged the crowd and one another in a presentation of music that would make even this cranky existentialist want to live forever. What I know about these people and this music is they both know something I want to know. And I suspect that is what the music's goal is, to resonate the Psalmist when he wrote, "

The group's arrangements, particularly of "Swing Low Sweet Chariot" and "Noah" (appropriate for the five days of rain we have recently received in the area), were knife-crease sharp like their signature overalls topped with tuxedo jacket, shirt and black tie. The group generously sampled their most recent, Grammy-Award winning recording Still Rockin' My Soul. "Standing in the Safety Zone" was ebullient and "Jesus Gave Me Water" sublime (requested of the quartet by my wife). Did I say they were friendly and giving?

Giving... related to "Gift." A gift is what the Fairfield Four shared with Little Rock with their music and performance. But in a larger context, it is a gift of Black America to America, one full of love and forgiveness, hope and happiness. Recent the bass singer Joe Thompson was featured on the ABC Nightly News. Besides singing, Mr. Thompson, the elder in the band at 81 years old, drives a school bus for special needs children in his hometown of Nashville. ABC Anchor David Muir had this to say:

"At 80 years young, he just won a Grammy. And then quietly returned to his day job. Tonight, the school bus driver the children call Mr. Joe. To the children he gets to school every morning in Wilson county, Tennessee, Joe Thompson is just the bus driver. But tonight, families here are learning that the man behind the wheel for the last 14 years is now a Grammy winner, too. On the Grammy stage, he thanked the folks back home at the bus barn. Would like to send out a shoutout to the transportation department in Wilson county, Tennessee. Thompson sings bass for the Fairfield four, a legendary a capella gospel group. His day job pays him $17 an hour, driving little boys and girls with special needs. The children he serves are now sharing their love, which he says feels just a nice as his Grammy."

"And whoever would be first among you must be your slave, even as the Son of Man came not to be served but to serve..." Honor such Grace.

March 9, 2016 Setlist: Hallelujah; Come on in This House; Swing Low Sweet Chariot; Noah; Don't You Let Nobody Turn You round; Children Go Where I Send Thee; Standing in the Safety Zone; Highway to Heaven; There Must be a City; Jesus Gave Me Water; Stone House; Dig a Little Deeper, Rock My Soul. 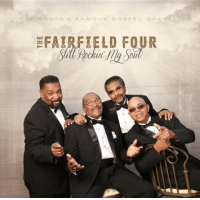 Still Rockin' My Soul is a grand representation of the Fairfield Four in concert. The music here is not new, even to the group, who has previously recorded several of these songs in earlier iterations of the group. The true beauty here is the invention in arranging well-worn standards of the gospel repertoire. Everything necessary for true singing is here: drama, passion, joy, sorrow, hope and redemption. In this music lay a wealth of peace and security that is needed now more desperately than ever.