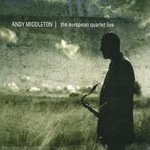 The last time that saxophonist Andy Middleton was heard from he was providing a pro-environmental message on Re-Inventing The World, (Intuition, 2003) with such titles as "Three Mile Island," "Atlas Shrugged" and "At The Foot of The Hill." Middleton's most recent outing, The European Quartet Live (Q-Rious music, 2008), seems to have shifted gears with only one environmental warning ("Up The River").

A lot has occurred in Middleton's life since 2003. He is now living in Austria where he is an Instructor at the Vienna Conservatory. The name of this ensemble is somewhat misleading as half of the group are ex-pat musicians (Middleton and drummer Alan Jones). Likewise bassist Paul Imm is an American now living in Germany. The group's pianist, Tino Derado, is a native German musician.

The music that is provided on this project raises the bar from Middleton's last effort. While before he had a larger ensemble with him, the European Quartet seems like a well-meshed working group. Middleton's own performance here is filled with even more of the swagger on tenor, and lyricism on soprano sax that makes each listen more engrossing. An estimate is that he is featured more on soprano sax than tenor, even though he switches horns during certain tracks—these are lengthy recordings averaging about eleven minutes per composition. Although a good case could be made for him having a similar sound to Joe Lovano, Andy Middleton's solos bring a much appreciated sense of lyricism to the tracks. Pianist Derado also seems to seems to exhibit his own individualism, and his rocking solos keep up with Middleton's.

Two of the compositions are traditional. "Afghan Caravan Song," which throws in some Asian texture and "Christus Factus" which is based upon a Gregorian Chant. On only two of the tracks does Middleton turn down the heat, "Afghan Caravan Song," and the attractive "Cherry Street," which Middleton dedicates to his friend Christoph Eidens. Taken as a whole, this album is quite a stirring work which needs to be absorbed with repeated listens.