Home » Jazz Articles » Darren Johnston: The Edge of the Forest

Darren Johnston: The Edge of the Forest 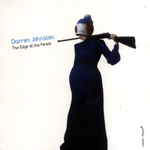 Canadian-born Darren Johnston was recently chosen by Down Beat Magazine as one of 25 Trumpeters of the Future. Currently working in the Bay Area's fertile new music scene, Johnston is a prime example of the new generation's eclectic interpretation of the jazz tradition. After acquiring his Master's in composition from Mills College in Oakland, California, Johnston went on to hone his craft with such legends as Fred Frith, Myra Melford and Rova. Besides recordings of his collaborative work, The Edge of the Forest is his first session as a leader.

A number of these pieces originated as dance commissions, revealing a rich balance between rhythmic ingenuity and intricate, yet tuneful melodic concepts. Assisting in the interpretation of these sublime works are veteran clarinetist Ben Goldberg, saxophonist Sheldon Brown, bassist Devin Hoff and drummer Smith Dobson V. A magnanimous leader who provides ample solo time to his sidemen, Johnston himself demonstrates an architecturally sound approach; on "Broken," he unfurls a series of cascading lines that radiate audacious tonalities without abandoning melodic structure.

While Johnston's trumpet playing is warmly expressive and thematically concise, it is his elaborate writing and creative arranging that stands out. Layering contrapuntal melody lines into cantilevered rhythms and shifting time signatures, Johnston's tunes eschew conventional structures in favor of a more narrative approach. On "Be the Frog," Johnston's buttery trumpet solo dominates the first half of the tune until the ensemble temporarily subsides, revealing a rousing, unaccompanied duet between Brown's muscular tenor and Goldberg's woody clarinet, before regrouping for the coda.

Tunes like "Be the Frog," "Foggy" and "Broken" expose their dance-oriented beginnings with interlocking counter-harmonies and infectious lock-step vamps, while the ebullient post-bop of "Apples" acts a vehicle for Brown's tortuous tenor. Revealing a meditative side, Johnston's honeyed trumpet refrains and Goldberg's sinuous clarinet musings exude billowy lyricism on the introspective title track. "Sippin' With Lou" bridges the gap, segueing from coiled angles, capricious tempo changes and frenzied collective improvisation into an atmospheric and dreamy finale.

Despite the sophistication of his writing, Johnston is a keen tunesmith whose melodic sensibility never falters, drawing equally from nostalgic brass charts, knotty post-bop lines, simmering funk ostinatos and exotic harmonies. The Edge of the Forest is a brilliant example of where jazz is headed—adventurous and unpredictable, yet always accessible. Darren Johnston is definitely one of the top trumpeters of the future.

Be the Frog; Foggy; Cabin 5; Broken; Apples; The Edge of the Forest; Sippin' With Lou.