BY MARK CORROTO
September 3, 2010
Sign in to view read count 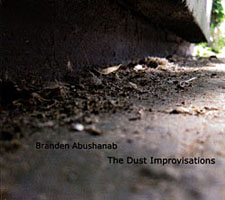 Unless you happen to be William Parker or Joëlle Léandre, the making of a solo bass recording is one (sorry for the pun) plucky career move. That is just what bassist Branden Abushanab has done with these forty-six minutes of The Dust Improvisations.

The South Carolina native delivers five performances that focus on texture over timekeeping, and energy instead of rhythm. Like the early recordings of guitarist Loren Mazzacane Connors, these pieces feel as if Abushanab is reinventing the bass as sort of a free improvisation folk instrument. He eschews the groove, opening the ears to the entropy of his energy.

With titles like "Around The Bridge," "Above The Strings," and "Below The Bow," clues are given to the starting place for the pieces. Mostly favoring the bow over the plucked notes, Abushanab dances his bow, often scratching out bounced and abrasive notes.

Delivered whole without overdubbing or post-edits, the work sometimes comes off as raw or unfinished, a sort of basement tapes to be savored when the bassist is one day rich and famous. Is that possible in the world of free jazz?

Beneath The Wood; Under The Case; Above The Strings; Around The Bridge; Below The Bow.