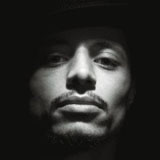 Listen out for this guy in 2008. Vocalist Jose James isn't going to be the next Jamie Cullum—his style is too understated and his attitude faces purposefully away from the mainstream—but The Dreamer, Brooklyn-based James' debut album, has star quality.

James made a splash in late 2007 with a reworking of John Coltrane's "Equinox," and he's four-square in the post-bop vocal tradition established by older singers like Mark Murphy, Jon Lucien and Leon Thomas. But there is nothing remotely anachronistic about his music, which is cool, poised, immaculately hip and, like that of his fellow alumnus from New York City's New School For Jazz and Contemporary Music, pianist Robert Glasper, touched by the low-slung groove of the hip-hop generation.

Seven of the ten tracks were written by James (who also produced and arranged the bulk of the album), and their vamp-based structures and intimate, smoky performances are reminiscent of the recordings Leon Thomas made with saxophonist Pharoah Sanders in the late 1960s, though without Thomas' trademark yodeling. Not for nothing, one of the pages on James's website is titled "The Creator Has A Master Plan," after the Sanders/Thomas opus on Sanders' Karma (Impulse!, 1969).

Of the three covers, the oldest is Roland Kirk's "Spirits Up Above," the more recent Bill Lee's "Nola," from the 1986 movie She's Gotta Have It, and Freestyle Fellowship's "Park Bench People," from the album The Other Side: Los Angeles (Deaf Dumb & Blind, 2007).

James' core band—pianist Nori Ochiai, bassist Alexi David and drummer Steve Lyman—is stunning. Muscular, but loosely, casually so; morphing seamlessly between straight-ahead, funk and hip-hop rhythms, and demonstrating that a lot more unites these musics than divides them. The guest artists are a treat too. Pianist Junior Mance (one of James' tutors at the New School) makes his blues-drenched presence felt on "Spirits Up Above," and trumpeter Omar Abdulkarim's robust solo on the title track brilliantly offsets James' breathy, astral-jazz delivery.

The Japanese edition of The Dreamer includes two jazz standard warhorses: Bobby Timmons' "Moanin'" and Heyman, Sour, Eyton & Green's "Body And Soul." Possibly, they've been left off the UK/US release to emphasize James' modernity, and certainly, he doesn't need to wheel them out to make his mark. This is a five-star, totally delicious—and for someone who'd just about given up on jazz vocalists, unexpected—smash of a debut.