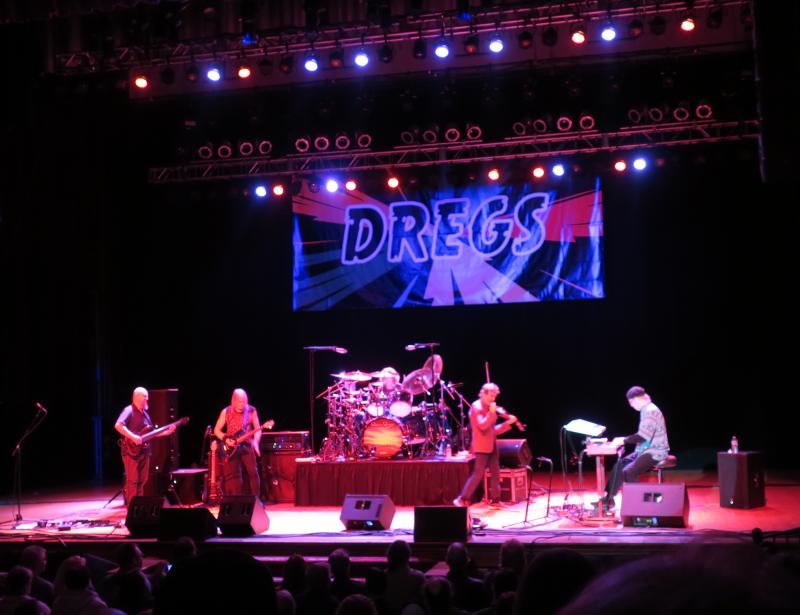 They've always remained one of the most under-the-radar of fusion bands. The Dixie Dregs' every-damn-thing- at-once musical stew could have hardly been better designed to elude widespread exposure—too much jazzy complexity for a group of rockers, too much country and folk for a jazz combo, a tinge more classical than you'd expect from either, all without any singing to grab the ears of radio (bar a couple exceptions shortly before their initial early-eighties breakup). Nonetheless, the lack of household-name fame is balanced out by the admiration of countless musicians and a devotion from listeners that borders on religious.

The Dregs' existence has been sporadic since the end of their full-time heyday, though they made one more studio album in the mid-nineties and generally managed at least a quick road jaunt every few years. Time has flown so much, though, that this tour was the first in a decade and a half—dubbed the Dawn of the Dregs and featuring the lineup that recorded their label debut Free Fall (Capricorn, 1977). Overjoyed fans had eagerly traveled from all over to catch them again, though nobody was happier to be there than the band themselves.

"We are very thankful for all of you who've come on this journey with us," bassist Andy West earnestly declared to hearty applause in his traditional role as between-song spokesman. He was introducing the epic prog-jazz suite "Odyssey," though of course referring to the group's own trajectory most of all. Plenty of hoots and happy cheers confirmed that there were more than a few members of the audience who'd been following along for the whole four decades. There was even some dancing up in the back rows from time to time—not always common for music this brainy, but Steve Morse's compositions are nothing if not sunny, and the heavy-rocking energy coming from the stage would have put bands half their age to shame.

Some members had been away from the fold for years pursuing other endeavors (musical and otherwise), but they've all remained top-shelf players who never let the impressive chops distract from a killer song. Maybe it's like riding a bike. Catchy and dizzying hooks flowed from everyone's fingers as smoothly as gliding birds, from the downright effervescent jig of "Holiday" to the barn- stomping "Moe Down" and the brightly weird humor of "Leprechaun Promenade" (just one of Steve Davidowski's several showcases at the keys).

More highlights included the lush psychedelic "What If"—an early example of new age "before it became old age," as West deadpanned—and a rip-roaring "Refried Funky Chicken" full of scratchy guitar and grunge violin. The first set had half the theater jumping to its feet by the end, and the high points kept coming through the second: this tour premiered some never-before-played deep cuts with "Day 444" and the understatedly classy "Go for Baroque." The full standing ovation at the end practically shook and deafened the whole house.

If the band is seasoned as Texas whiskey, it rarely slowed them down during the heavy rockers and rapid-fire hoedowns, and the songs themselves shine brightly as ever without a scratch. This kind of communion is more important than huge money and fame. The sheer joy of sharing such smart and endlessly fascinating music is really what it's about.