BY PATRICK BURNETTE
March 4, 2018
Sign in to view read count 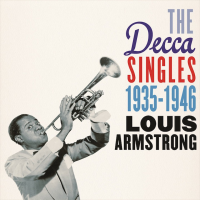 Good news, jazz fans—rhythm saves the world again. The Universal Music Group tentacle labeled "Verve Records" has issued The Complete Decca Singles 1935-1946. Don't be put off by the term "singles." Since this was the 78 era, all recordings were essentially singles and the set thoroughly covers Satchmo's output for Decca during the period. (Even the spoken-word "Elder Eatmore" sermons are included). This material previously appeared in a fine Mosaic box and a Definitive Records set of dubious provenance. Both are out of print, so it's good to see this material available "digitally" (by which UMG means streaming and mp3 only).

These Decca sides are often overlooked because they fall between Armstrong's earth-shattering Hot Fives and Sevens and his return to his Dixieland roots with the All-Stars, but there is a plethora of fantastic music here. By the mid-thirties, Armstrong's trumpet-playing reached new heights of power and polish. His improvisational forays aren't as lightning-bolt startling as the best of the fives and sevens, but as examples of sheer instrumental excellence and control they surpass the earlier work. His choruses on the remake of "Struttin' with Some Barbeque" justify the set on their own, and his genius for paraphrase and elaboration remains at a summit throughout these sides.

Decca featured Louis' singing more heavily than his trumpet playing. Most jazz fans agree that Billie, Ella, and Sarah are the top female jazz vocalists, but the pantheon for men is harder to pin down. Is there any better candidate for top dog than Louis? Since Decca had him sing just about every kind of song popular during the thirties, this collection shows what a master vocalist he'd become by the mid-thirties. Critics complain that most of the songs assigned to him were mediocre at best, which is quite true, but listen to the results. Louis doesn't need the cream of the great American songbook when he can spin gold from the dross. And a few of the novelty numbers—the brilliant "Trumpet Player's Lament," for instance—are as good as anything he put to wax. Only a few tunes elude redemption at his hands. The Hawaiian numbers are too insipid for even Louis to strike sparks from, and "If It's Good Then I Want It" is just plain stupid, period.

Armstrong's collaborations with the Mills Brothers provide many of the highlights here (the blend of voices, acoustic guitar, trumpet and "mouth trumpet" is sublime) but also include a couple songs with painfully retrograde lyrics—the kind that got the trumpeter in trouble with black progressives in the fifties and sixties. Listen carefully to this set, and you'll learn lots about the thirties as a cultural moment as well as about Louis' incomparable artistry, charisma, and good humor. The Hot Fives and Sevens remain the essential starting place, but this trawl shows Satchmo's alchemical powers at full force and provides hours of fun listening. Don't overlook it.

Visit udiscovermusic.com for a complete listing of all 136 tracks.