Home » Jazz Articles » Clogs: The Creatures in the Garden of Lady Walton

Clogs: The Creatures in the Garden of Lady Walton 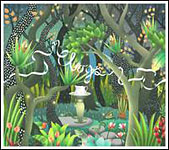 With the digital-only EP, Veil Waltz (Brassland, 2010), neoclassicist quartet Clogs announced that it was back in action after a lengthy hiatus. But that brief collection, largely written for film, was really only a taste-whetter for The Creatures in the Garden of Lady Walton, Clogs' first full-length CD since Lantern (Brassland, 2006). Like Veil Waltz, Lantern presaged what was to come, but there's as much unexpected as there is familiar on The Creatures, Clogs' most ambitious project to date.

Words like "ambitious" often suggest bolder, sweeping music, and while a larger cast of characters augmenting Clogs' longstanding line-up does allow for a broader sonic palette, the music still breathes a combination of minimalist concerns, haunting folklore and, in this case, greater use of vocals. The 42-minute song cycle was written entirely by Clogs' co-founder Padma Newsome during a 2005 residency at Giardini La Mortella in Italy—a botanical garden created by British composer Sir William Walton's wife, Lady Walton—a shift away from Lantern's more egalitarian compositional approach. That Newsome's music was created in stages, by musicians spanning three continents over a period of 18 months, makes The Creatures all the more remarkable, as the interaction and intertwining of a tremendous range of instruments feels both natural and of the moment.

"On the Edge," one of six tracks to feature My Brightest Diamond's Sharon Worden, was also included on Veil Waltz to provide a sneak peak at The Creatures, but was far from a full picture on a series of songs ranging from the a capella choral round of "Cocodrillo"— channeling Meredith Monk through Steve Reich via the Baroque era—to the minimalist, pulse-driven instrumental "I Used to Do," where Bryce Dessner's tart electric guitar combines with Newsome's viola, Thomas Kozumplik's marimba and Rachael Elliott's deep bassoon to create chamber music with an unmistakably modernistic bent.

Elsewhere, "Red Seas" begins in folk territory, with only classical guitar and voice; but as other instruments are introduced, including Dessner's brother Aaron (both play in the alt-rock group The National) on bass, it begins to build in scope and complexity, culminating in a hand percussion-driven passage of orchestral breadth representing Clogs' at its most overtly dramatic. Matt Berninger (also of The National) sings "Last Song" with Leonard Cohen-like economy; a haunting song more in kind with Clogs' melancholic tendencies.

With an intro largely driven by Elliott's pulsing bassoon, "Adages of Cleansing" is sparer still. Newsome's penchant for deep, dark melodies is at its best, leading to The Creatures' fieriest moment, a mesh of interlocking parts that seems to build out of nowhere only to suddenly cease, dropping off the precipice into a brooding coda which, with its oddly-intervallic melody, tests Worden as she soars into her upper register.

Representing both consolidation and evolution, The Creatures in the Garden of Lady Walton is Clogs' most expansive work to date. With an ever-broadening reach, this intrepid quartet continues to make some of the most hauntingly beautiful and spiritually profound chamber music of the last decade.

Cocodrillo; I Used to Do; On the Edge; Red Seas; The Owl of Love; Adages of Cleansing; Last Song; To Hugo; Raise the Flag; We Were Here.