By Laurel Gross
December 14, 2007
Sign in to view read count 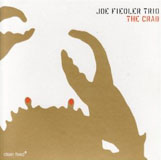 Trombone can be incredibly affecting and riveting, but is too often an underappreciated instrument, not always receiving the full respect or platform it deserves, even when its inborn versatility is masterfully handled by practitioners who grapple with its challenges and make it soar. No matter what music, mood or master it serves, this long and shiny sliding thing is extremely capable of conveying the distinct personality and intent of each artist who fights the worthy battle to realize its (and their own) singular potential.

On The Crab, Joe Fiedler shows what its diverse capabilities can be when excellently played—and his own adventurous, expansive spirit and technical prowess add to the pleasures. Fiedler has chosen a concentrated trio session, showcasing veteran rhythm spinners John Hebert (bass) and Michael Sarin (drums), that feels as organic but also as well-conceived and constructed as any object in nature. The result is a deeply expressive and highly effective modern jazz album.

This inventive trombonist has performed Latin-inflected music and clocked in many a night in such big bands as that of Charles Tolliver and Satoko Fujii. He produced a well-received tribute to trombone innovator Albert Mangelsdorff in 2006, and his name has been linked with the tradition of Ray Anderson and Roswell Rudd as well as Barry Rogers. But here, like the sturdy crab, Fiedler reaches for what he hears in his own head and digs into his composing and playing resources, offering new ways of experiencing the instrument. The traditional term "solo seems inadequate and even outdated when applied to what happens on these aesthetically satisfying tracks, as all instruments are featured, their focused interfacing seamless and indivisible even though the trombone is out front, as it rightfully should be.

This is an endeavor that merits repeated listening and adds to the overall sum of the trombone's many charms.