BY JOEL ROBERTS
December 14, 2007
Sign in to view read count 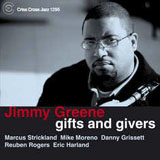 It's probably time to cast aside labels like "up-and-coming" and "rising star" when describing Jimmy Greene. As Gifts and Givers makes clear, the Connecticut-born tenor saxophonist has definitely arrived.

An inventive, technically-advanced mainstreamer, Greene made his mark in the bands of Horace Silver, Tom Harrell and Harry Connick Jr., as well as with younger studs like Jason Lindner and Avishai Cohen. On his fifth effort as a leader, he's paired with another young tenor titan, Marcus Strickland. The two saxophonists prove themselves a like-minded and well-matched pair as they lead an explosive rhythm section—the superb drummer Eric Harland, bassist Reuben Rogers, guitarist Mike Moreno and promising young pianist Danny Grissett (now he is a "rising star")—through a set of compelling originals and nicely varied standards, including John Coltrane's harmonically complex "26-2," New Orleans legend James Black's intricate "Magnolia Triangle" and Kenny Dorham's "Blue Bossa" (with Greene doubling on soprano sax).

While they mostly steer away from the sort of twin-tenor battle popularized by Sonny Stitt and Gene Ammons, Greene and Strickland do get into some high-octane, old school jamming, notably on Stitt's bebop chestnut, "Eternal Triangle." The opening "Mr. McLean" is a rousing tribute to Greene's mentor, the great alto saxophonist Jackie McLean, with the two tenors expertly capturing McLean's intensity and unique inside-outside sensibility.

All in all, it's an impressive outing that should help solidify Greene's reputation as one of the better tenor saxophonists of his generation.