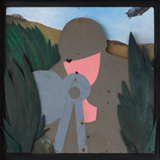 Embroiled in revolution and protest, 1968 was a tumultuous time, and a fitting year for such a document to emerge. The Vietnam War, the American Civil Rights movement, Martin Luther King's assassination and the Paris student riots of 1968 all are subconsciously mirrored in the album's chaotic fury.

Opening with a staccato horn riff and stabbing percussive ostinato, the band sounds less like an acoustic jazz group than a feverishly overdriven machine, pistons shrieking, gears rattling. Brötzmann and his front line of horn players trade caustic tirades over the bustling, thunderous palpitations of Han Bennink and Sven-Ake Johansson.

Conceiving brief melodies of an almost accessible nature one moment, only to savagely rend them to pieces in the next, the octet offers a revolutionary stance in their execution and intent. Still challenging after almost forty years, Machine Gun stands tall as a high water mark of European free jazz.