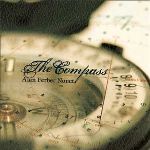 With The Compass, trombonist Alan Ferber cements his reputation as one of the jazz world's premier composers and arrangers for larger groups. Why Ferber's work, as well as his band, does not have a higher profile is a mystery. This is music that deserves to reach a much wider audience, period.

Ferber's vehicle is his nonet, which has remained stable since the release of Scenes From An Exit Row (Fresh Sound New Talent, 2005); a compliment in itself. However, instead of just being a means to support his excellent soloing, the nonet is a giant feedback loop. Ferber not only writes for these specific players, who audibly respond with enthusiasm and vigor, but also encourages them to arrange their own music for the band. Furthermore, when inevitable substitutes sit in, he reaches out to bring their music into the band's book.

Thus, the nonet is a scene within the scene, with a personality that admittedly is led by Ferber, but with large contributions from its members. On Exit Row, Ferber's music was compared to a "mellower, less quirky Either/Orchestra," but now any comparisons need to bring in the grande dame of large group composer/arrangers, Maria Schneider.

While their music differs in their main characteristics, Ferber now exhibits as much control in creating a specific sound as does Schneider, who has almost double the forces at her command. This comparison is most apt during the numerous choir sections, with part writing that stands out for its overt beauty with a sound that seems much bigger than possible. However, while Schneider's music is almost pure emotion translated into gorgeous music, Ferber remains firmly rooted within the swinging, cool, belt-it-out, abstract jazz world.

"Angel's Landing," clocking in at just under sixteen minutes, is the figurative and literal centerpiece of the album and a showpiece for Ferber's skill. Starting with a figure that sounds faintly like Sibelius, it moves through a classical contrapuntal introduction involving the entire band that is both euphonious and dissonant, and which signals a large piece. Bassist Alexis Cuadrado continues the introductory feel with an amazing, nearly three-minute rubato solo, before setting up the rhythmic feel for the next section.

The main, very pretty theme is now introduced and complexity is gradually added, leading to a solo by Ferber, who shows that he plays as well as he writes and arranges. The band enters to accompany him, leading to a solo by guitarist Bruce Saunders and an extended solo by pianist Bryn Roberts. The piece closes with a recap containing more beautiful part writing.

The Compass contains music that is a joy to listen to and revel in, and will hopefully bring Ferber and his nonet the attention they deserve.