By Clifford Allen
February 10, 2008
Sign in to view read count 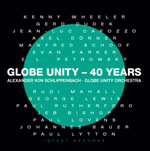 "The cosmic eye at the central point and on the periphery of the sphere can see all the structures from every angle at the same time. From the divine indifference of the sphere emerge the solos with all the impulse of revolt. The lines they trace are the images of life."— Alexander von Schlippenbach, from the liner notes to Globe Unity (Saba, 1966).

In 1966, German pianist/composer Alexander von Schlippenbach convened two of the groups he was working with (the Manfred Schoof Sextett and the Gunter Hampel group) and added a host of rising stars of European free music, some whose pedigrees are now mythical and others who have remained as obscure as their talents were large. Fourteen musicians—two trumpets, five reeds, tuba/trombone, vibes, piano, two basses and two drummers—came together in a momentous squall. Globe Unity, containing the dense title track and a sparser piece (which had the musicians doubling on a variety of flutes and non- western instruments) entitled "Sun," was released on the Saba label under his name. Following a notorious performance at the Berlin Jazztage 1966, it was technically the pianist's first recording as a leader.

The orchestra itself became a working and recording group the following year, its performance at Donaueschingen frightening to the "new music" cognoscenti who also reviled tenor saxophonist Archie Shepp's performance at the same festival. The GUO had a few periods of hiatus in lean economic times during the 1980s and 1990s, but despite change and loss have persevered as an ensemble since their inception. Following a number of recordings for FMP, Po Torch, and Japo (plus archival documents on Atavistic), they found a home on the Swiss Intakt label with Globe Unity 2002 (Intakt, 2002). Globe Unity - 40 Years is their 17th recording; it is also quite possibly the final recording of trombonist Paul Rutherford, a longtime member of the orchestra who passed away in 2007.

The Globe Unity Orchestra of 2008 looks a little different than the earlier line-ups—bassists are absent, for the only two who could hold that chair, Peter Kowald and the criminally underrated Buschi Niebergall, have since died. Though for most of the 1970s (the "Wuppertal Years"), Aachen-born Paul Lovens was the sole percussive engine, he's recently been supplanted by Paul Lytton. The current cast is diverse, with many returning conscripts as well as the young fire of trumpeters Axel Dörner and Jean-Luc Capozzo, trombonist Jeb Bishop and bass clarinetist Rudi Mahall.

Globe Unity - 40 Years counts as something of a retrospective, and quite nearly a "greatest hits" album. There are two tunes from the classic FMP dates, one tune each from saxophonist Steve Lacy and trumpeter Kenny Wheeler, and "The Forge" from their brief Japo sojourn.

The title track is clearly written around the Schlippenbach-Lovens-Evan Parker trio, who after a punchy collective beginning and a momentary rise in density, emerge as the primary voice. Parker's tenor saxophone is a picture of commitment to phrases and scales, hanging onto and extrapolating the folk dances of piano and drums. There's a brief tenor-drums duet before a riff straight out of the original "Globe Unity" emerges in a beeline for the past, as Parker's controlled ululations ride atop the orchestra's pulse. Trombonist George Lewis, who has followed Anthony Braxton's membership as an AACM figure in the orchestra since the 1980s, solos unaccompanied and in a firestorm trio with Lovens and altoist Ernst-Ludwig Petrowsky—frenzied and searing madness that recalls some of the high-octane playing of the FMP heyday. Soon other voices join the party in pointillist stabs, returning to the forms that introduced the piece and, as Schlippenbach's fingers rake the piano strings, invoking the overarching order in the most notoriously "free" big band in contemporary music.

"Out Of Burton's Songbooks" is a theme by an early collaborator, Dutch reedman Willem Breuker, who was part of the original Globe Unity date and throughout the band's first several years contributed to its book. It's a reference to (if not lifted entirely from) pianist Burton Greene, who has made his home in Holland since the late 1960s. Schlippenbach and Greene aren't that different in their approach—both have a huge affinity for pianist/copmposer Thelonious Monk and Eastern European folk music, and yet can bring an uncanny pastoralism to the proceedings. Schlippenbach opens the tune solo in a minor key "tree theme" before a plodding Kurt Weill- like melody appears. Trumpeter Manfred Schoof is poised in his series of trills and bell-clear runs, sallying over wispy percussive accompaniment and in counterpoint with the leader. There's a ham-fisted take on Gypsy music that leads into a collective improvisation, Gerd Dudek's gruff post-bop saxophone keen tearing out from under, only to be swallowed again. Mahall and trombonist Johannes Bauer joust in trio with the pianist; Mahall's painstaking solo architecture is a studied advance on Eric Dolphy, and runs in direct counter to the borderline obnoxious paint-peeling of his predecessor in the group, Luxembourgian Michel Pilz.

"Bavarian Calypso" has the distinction of being included on one of the ultra-rare FMP singles. Though relegated mostly to collective improvisation, the tune is a fantastic (and humorous) take on the South African kwela themes used by contemporaries the Brotherhood Of Breath, as well as German parade music and who knows what else. Here, it's also a vehicle for the blistering tailgate of Jeb Bishop and torrents of multiphonics from Petrowsky. It segues into "Nodago," a beautiful dirge by (and feature for) Kenny Wheeler, who joined the band in 1970. Tacked on is a brief but illuminating series of earmeals by Rutherford and Lovens, the trombonists' buzzing and chortling a perfect transition into Steve Lacy's "The Dumps." Lacy appeared on a few GUO recordings during the 1970s and contributed "Worms" to the album Compositions (Japo, 1979), but "The Dumps" hasn't had orchestral treatment until now. Dudek inhabits the composer's horn amiably, his clear tone carrying the traditional melody into a spirited horns-only fanfare. Mahall digs in over the rhythm section, turning birdsong into sqawks as the tune's character shifts from winsome melody to a contrapuntal conflagration.

Axel Dörner, surely among the trumpet's most willfully experimental voices since Bill Dixon, opens "The Forge" unaccompanied, a panoply of soundmasses, guttural exhortations and vaguely electro-acoustic sounds spilling from his slide-affixed axe. The tune itself builds on the multipart "Payan" theme, nearly martial before becoming a true rhythmic hornet's nest. Schlippenbach and Lovens take the reins in knotty dialogue following Lewis' dissertation on flicked facility, arcing exhortations and subtonal discoveries.

The closing title is apt: part of running an orchestra is hammering out structure from fifteen very individual creative minds. But the longevity of the band is a testament to the true cooperative nature of the effort. Now nearly forty-two years on, the feral intensity of Globe Unity has been replaced with a clear handle on a collective lexicon. Schlippenbach quoted the painter Paul Klee in the first album's liner notes: "You leave behind all that belongs to this side, building yourself a new world on the other side, a world in which everything is wholly 'Yes'." Could there be another answer?