By GLENN ASTARITA
January 16, 2017
Sign in to view read count 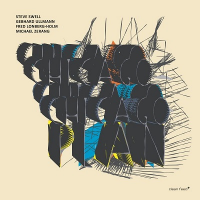 The Chicago Plan equates to a strategic plan, evidenced by these magnetic and invigorating works by reedman Gebhard Ullmann (Berlin), trombonist Steve Swell (New York City) and Chicagoans, drummer Michael Zerang and cellist / electronics-ace Fred Lonberg-Holm. Recorded in Chicago, the musicians were seemingly immersed in the Windy City's cutting- edge jazz and improvisational forces that may have hovered over the studio like a guiding spirit.

Here, some of the best and brightest live up to, or perhaps exceed expectations on this multifaceted set that offers a contrasting track list. They gel to an edgy and quasi-experimental New Orleans tinted bump and grind on the broadly based opener "Variations On A Master Plan (Part 3)." And kick off "Composite 10" with Zerang's poetic, polytonal drum vamp, leading to the hornists' diametric phrasings, densely articulated conversations and emotive solo spots. But the plot thickens on "Rule #1: Make Sure You Can Play Your Own Tune," which is designed with a complex and regimented unison free-bop pattern that is instigated by the drummer's fierce support and heightened by Swell and Ullmann's fluid solos. Hence, the quartet delves into scorching cadenzas amid a few nicely placed lulls, etched out by Lonberg-Holm's angular arco notes.

The final piece "For Henry," progresses like a fractured dirge, yet weirdly lyrical and capped off by Swell's bluesy, barrelhouse lines and Ullmann's loping bass clarinet notes, where Zerang's rolling fills generate an expansive musical canvass. Other movements interspersed throughout the program are framed with hair-raising free-form sorties and a labyrinth of dips and spikes via an undulating current and the ever-present element of surprise. Thus, all the nuts, bolts and moving parts converge into a near-flawless outcome.