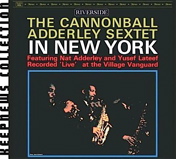 Jazz musicians are antisocial when measured by the public's standards. Tell someone you're a musician, and the response is: "What's the name of your group?" Truth of the matter is that, the MJQ and Art Blakey notwithstanding, group identity seems an ill fit with the music's emphasis on individual expression. For this reason, it's all too easy to dismiss the dates featuring the Adderley Brothers' Group as grooving and highly communicative, but lacking in substance compared to the sessions exclusively under Julian's name (Somethin' Else, Blue Note 1958; Know What I Mean?, Riverside 1961) or featuring him with Miles Davis' anointed cast (Milestones, Columbia 1958; Kind of Blue, Columbia 1959).

But the Brothers' In New York, a 1962 live recording from the Village Vanguard, is the exception. It may not have yielded a hit single on the order of "Dis Here," "Sack O' Woe,' "Jive Samba" or "Mercy, Mercy, Mercy," but it's a recording which, as Orrin Keepnews makes clear in the new liner notes for this freshly-minted Riverside Keepnews edition, still holds up, repaying multiple visits.

Compositionally, the highlights are the opening tune, "Gemini" (Jimmy Heath's bi-modal 6/8 blues); "Dizzy's Business" (a bebop gem by Basie arranger Ernie Wilkins); and an infectious Zawinul blues, "Scotch and Water." Yusef Lateef's compositions are not especially memorable in themselves but, along with his playing, provide richness, depth, and resonance lacking on the Brothers' other recordings. And his tenor playing is so good on the set chaser by Sam Jones, one wishes the recording would simply run on.

Even with the addition of Lateef, Cannonball dominates throughout. His introductory remarks on what it means to be truly "hip" ("hipness isn't a state of mind: it's a fact of life") are immediately illustrated by an arresting, hard-charging solo: he's a flaming comet on "Gemini," placing the ensuing soloists in the unenviable position of maintaining the brightness. But give equal credit to unsung hero Sam Jones, an unflappable walker whose every gritty note is distinct with no extra help from the engineering.

When I caught the same group at Birdland it was while sitting next to Yusef Lateef during a set break that I received a valuable lesson in courtesy and respect. One of the sextet members suddenly appeared in the row behind us, filling Lateef's ear (and unavoidably mine) with non-stop aspersions cast upon the intermission pianist—a gifted musician but rushing tempos and ostensibly rattled. The trash talk didn't strike me as that remarkable, even from a professional. What I've never forgotten, though, was Lateef's turning a deaf ear to his band mate who, sensing he was getting nowhere, issued a final insult and walked off. By contrast, Lateef remained for the guest pianist's entire set, at the conclusion of which he loudly applauded, much to the visible appreciation if not shock and relief of the struggling musician.

Yusef Lateef brings the same class to the music of this session, perhaps the single most indispensable recording by the Adderley Brothers.