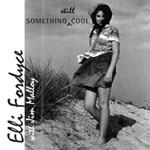 A New Yorker, Fordyce was always a budding vocalist and was friends with Bobby ("Darin") Cassotto, then a drummer. When Fordyce's family pulled up roots and moved to Cape Cod, Massachusetts in her senior year of high school, she was left alone and far from friends and music. It was only the existence of the newly released album Something Cool (Capitol, 1953), by June Christy, that allowed her to have some resolution to her life at that point.

When Fordyce graduated from the University of Mass. she elected to marry and raise a family and forgo her musical interests. It wasn't until age thirty that she was able to resume her singing career and began a long fourteen-year odyssey of getting her act on the road, which concluded with a tragic auto accident that ended her musical dreams.

In studying with pianist Barry Harris' vocal workshop, Fordyce decided to renew her vocal interests, culminating with a successful appearance at New York's Town Hall. The fact that this singer is seventy years old is neither confirmed by her appearance nor her voice which is still sturdy and tuneful.

This album has no axe to grind and opens with a casual and relaxed attitude. The Jack Segal/Marvin Fisher ballad, "When Sunny Gets Blue," has come a long way from being a late 1950s Johnny Mathis hit. As soon as jazz vocalists discovered it, the song became a perennial favorite, and is a perfect way to open Fordyce's album, with facile bass support from Mark White. Others including Jobim's "Dindi," Lerner/Loewe's "Wouldn't It be Loverly?" and Mercer/Van Heusen's "I Thought About You" offer perfect fodder into which Fordyce can comfortably ease.

A surprising asset to the album is duet partner Jim Malloy, who is a perfect foil for Fordyce on five tunes including Adler/Ross' "Hey There," Jobim's "One Note Samba" and Gershwin's "Love is Here to Stay." Fordyce gets to turn up the heat a bit on an up-tempo version of Burke/Van Heusen's "It Could Happen to You," where she trades fours with flugelhornist Jim Magnarelli. Harry Whitaker is the simpatico pianist on most tracks. Fordyce saves her version of the ballad that started it all for her for her finale, Billy Barnes' "Something Cool."

When Sunny Gets Blue; Dindi; Hey There; One Note Samba; Don't Blame Me; Wouldn't It Be Loverly?; Almost Like Being In Love; Imagination; Love is Here to Stay; They Can't Take That Away From Me; It Could Happen to You; I Thought About You; Something Cool.