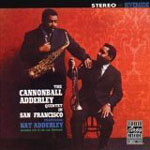 In the late 1950s and early 1960s, alto saxophonist Cannonball Adderley enjoyed his greatest popularity as measured by the commercial success of Riverside releases featuring his own group with his brother Nathaniel on cornet. The sessions were frequently recorded live, including spoken introductions by the ebullient leader, presenting some "accessible" tunes, and spotlighting at least one real crowd-pleaser ("This Here," "Sack O' Woe," "Jive Samba," "Mercy Mercy, Mercy"), each later appearing as a hit single.

These sessions are memorable less for the individual solos than the fire of the ensemble, anchored and propelled by one of the best walking bass players in the business, Sam Jones. Returning to these once-popular Adderley brothers releases is to lament the absence of such ensembles on today's scene as well as to be reminded of the relatively hard times the alto giant would encounter by the early 1970s, when he had trouble booking the group (reduced to auditioning for clueless Student Activities Directors shopping for next year's campus entertainment). Regardless, any of these Adderley brothers' Riversides represents the so-called "hard bop" idiom at its best and, like the groups of Art Blakey and Horace Silver, should be required listening for the ensemble sound alone.

Standing at the head of an impressive succession of popular on-location albums, 1959's In San Francisco not only established the formula but is, in its own right, an exemplary session, perhaps superior to the later groups with pianist Victor Feldman or Joe Zawinul and tenorist/flutist Yusef Lateef. The presence of the hard-swinging Timmons certainly increased the funk and soul appeal of this Adderley edition.

The leader is in especially high spirits on the present date, confiding to the crowd that Timmons' "This Here" is known in the community as "Dish heah," and putting it in the context of church music before unleashing Timmons' infectious down-home introduction on the jazz-soul waltz. The remainder of the program consists of two bristling Adderley originals and three jazz standards that, though still in the repertoires of countless musicians, have rarely been played better: Randy Weston's "Hi Fly," Oscar Pettiford's "Bohemia After Dark," and Monk's oft-recorded blues, "Straight, No Chaser."

If hearing the leader's exuberant, lusty playing on this night isn't enough to convince a listener that 1959 was the best year for Adderley (if not for jazz itself), then perhaps three additional recordings from the same year featuring the indomitable altoist's juicy tone and joyous preaching will clinch the deal: a brilliant, albeit neglected, quartet date entitled Cannonball Takes Charge (Riverside, 1959); a quintet date with tenorist John Coltrane, Cannonball Adderley Quintet in Chicago (Mercury, 1959); and, finally, a certain sextet date on which Adderley, along with Coltrane, trumpeter Miles Davis, and pianist Bill Evans formed the "response" team to bassist Paul Chambers' introductory musical question "So What?"—a call still sending out shock waves of seismic proportions almost half a century later (Kind of Blue, Columbia, 1959).