By JAMES NADAL
February 8, 2016
Sign in to view read count 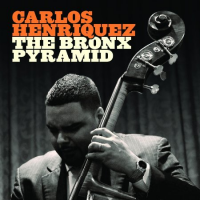 A common attribute or quality that Latin musicians have is that they are innately connected and tuned into their cultural roots. As in the case of Carlos Henriquez, who holds the bass chair in the prestigious Jazz at Lincoln Center Orchestra with Wynton Marsalis. Though he performs straight ahead mainstream jazz at a high level with that collective, on his debut as leader The Bronx Pyramid, he goes deep into his Puerto Rican heritage combined with the amalgamated sounds of New York City.

The record title represents an upward and positive accumulation of circumstances that has brought Henriquez to his current place in time. Opening with the title track, there is an Afro-Caribbean current highlighted by Cuban rumbero Pedrito Martinez on the bata drums, which drive the sensuous tempo for trumpet soloing by Michael Rodriguez. "Cuchifrito," is a Puerto Rican term for popular street food, and the song emphasizes the rhythms and tastes found in most Hispanic neighborhoods. Salsa superstar Rubén Blades does the vocal honors on "Descarga Entre Amigos," and Henriquez carries on the classic Cuban tumbao bass tradition of the legendary Cachao, who set the standard for this style of playing. It is an impromptu jam which calls upon intuitive knowledge to perform authentically.

The pace is tempered into a bolero mode on "Joshua's Dream," an appropriate vehicle for Henriquez to display his classical bowing technique, and allows Felipe Lamoglia to lay out discerning saxophone lines. "Guarajazz," is by his own definition a Cuban guaracha combined with big band swing, a prime example of Latin jazz done right. The guaguanco clave is the foundation for "Promesas," and the Puerto Rican bomba defines the pulsing "9 O'Clock Bomba," where pianist Robert Rodriguez demonstrates superb ability to interplay within complex rhythmic patterns.

Henriquez pays homage to his late mother on "Nilda," an emotional ballad perfectly carried along by drummer Ali Jackson, who accents the passages perfectly. Then it's back to his old home turf in the Bronx, for the brisk paced closing number "Brook Ave." This one brings it all back around to the heart and soul of his origins and influences. Though very much a native New Yorker, Henriquez is proud of his Puerto Rican ancestry, and on this record he displays his cultural pride in the original compositions and arrangements he offers. He has patiently waited to do his own record, and by the sound of The Bronx Pyramid, it was well worth the wait.