By Ian Patterson
January 19, 2023
Sign in to view read count 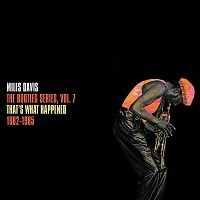 Eventually the steam roller that is the Miles Davis Bootleg Series was going to trundle into the trumpeter's 1980s comeback era. The preceding six volumes in this series have all been uniformly excellent—essential listening for the Davis completist. Volume 7, however, does not reach those heights. It is an uneven bag, much like Davis's 1980s output you might say.

In a nutshell, there are three discs. The first two are studio outtakes from the Star People (Columbia, 1983), Decoy (Columbia, 1984) and You're Under Arrest (Columbia, 1985) recording sessions, while the third is a previously unreleased live recording from 1983. Surprisingly, perhaps, there is nothing at all from Davis's comeback album, The Man With the Horn (Columbia, 1981).

Davis's comeback at the dawn of the 1980s, after five years of self-imposed hiatus, was big news. But the buzz was such that it was always going to be a big ask for him to live up to the hype. As it turned out, the 1980s was arguably the most divisive period of Davis's career. While fans around the world flocked to his concerts in their thousands, critics were often painfully dismissive of his albums, or else damned them with faint praise. The reasons for these polar opposite reactions reveal themselves neatly across these three discs.

But in the same way that those who deride John Coltrane's late period as not being 'the real Coltrane,' to completely dismiss Davis's final period as so inferior to what had come before as to be irrelevant, is to miss the point.

Admittedly, there isn't a single album between The Man With The Horn (Columbia, 1981) and his posthumous swansong Doobop (Warner Bros, 1992) that would make a Top Ten essential Miles Davis album list, but the eight albums that Davis recorded for Columbia and Warner in his final decade represented another change in direction, as had been his way in previous decades.

And, as this three-CD set demonstrates, there were some important continuities with his heyday—the most obvious one being Davis's love of the blues, the other being his obsession with rhythm, though in a more simple, less cluttered way.

Disc one begins with "Santana," a thirteen-minute, steadily grooving funk burner that catches fire around the halfway mark when Bill Evans, on soprano saxophone, and guitarist Mike Stern take it by the scruff of the neck. As before, Davis surrounded himself with young musicians, with Marcus Miller's quasi slap-bass style a departure from the past. Stern and Evans provide most of the sparks on this disc, while drummer Al Foster—the only link to Davis's 1970s bands— and percussionist Mino Cinelu handle the unwavering grooves.

The surprise on disc one is the appearance of trombonist J.J. Johnson—Davis's old buddy from the 1949 Birth of the Cool (Capitol Records) recording session. On two takes of "Minor Ninths," Johnson blows slow, noirish blues against Davis's painterly keyboard daubs. Johnson also leads elegantly on the final take of three versions of "Celestial Blues," a gently percolating blues funk of no special note otherwise.

Guitarist John McLaughlin tears it up on the architecturally spare yet intense "Katia," which differs only from the official album version by dint of three extra minutes.

The studio versions of Miles Davis in the 1980s was one thing, the live experience, as disc three testifies, was quite another. The energy emanating from the Star People band, captured at the Theatre St-Denis, Montreal, in 1983, is palpable. Several minutes of "Speak (That's What Happened)" and "What it Is" would find their way onto Decoy, but the rest of this energized 80-minute concert is seeing the light of day for the first time.

The only difference personnel-wise from the Star People sessions on disc one is that Darryl Jones handles the bass. Davis's chops are strong, making for a potent front line with Evans and Scofield on music fashioned from blues, funk and driving rhythms. The saxophonist and guitarist enjoy plenty of soloing space. Scofield's biting, bluesy solo on the banging opener, "Speak (That's What Happened)" and another on "It Gets Better" would make any Scofield live highlights reel. Evans, who toggles between soprano tenor and flute, is an equally potent force.

The slow blues numbers, "Star People" and "It Gets Better," find an unmuted Davis in terrific form—his strength, stamina and embouchure back to somewhere near their best. Nor is there any holding back on the up-tempo "What it Is" or on his fiery intro to the slightly misfiring "Hopscotch," which becomes somewhat derailed by a meandering percussive interlude.

There are certain echoes of Davis's dark and brooding 1970s aesthetic on "Star on Cicely," with Scofield's solo bristling with coiled tension, and in the twenty-five-minute-long finale. On this epic, tightly orchestrated ensemble jam, where "Jean Pierre" bleeds into "Code 3," the band serves up a leaner, more snarling alternative to the leader's broiling 1970s jazz-funk stews. Davis, Evans and Scofield all take impressive solos as the music waxes and wanes hypnotically.

For many, particularly for those too young to have seen Davis at that time, this previously unreleased live disc provides an alternative narrative—and a compelling one at that—to the oft-cited notion that Davis's last decade had little to offer. For this reason, if for few others, Vol. 7 in the Miles Davis Bootleg Series is a welcome document.

The three discs, presented in a handsome slipcase, are accompanied by a lavish 50-page booklet featuring photos and revealing essays by key Davis collaborators and esteemed critics, including the late Gregory Tate, to whom this release is dedicated.