The Book Of Klezmer 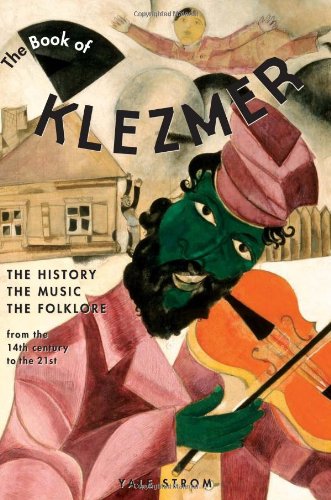 The Book of Klezmer:
The History, The Music, The Folklore
Yale Strom
Chicago Review Press
ISBN: 1556524455

Klezmer is a wellspring for NYC's jazz musicians and as Yale Strom points out in The Book of Klezmer ; this well runs very deep. While jazz's 'soul' is African-American spiritual music, klezmer is a separate genre rooted in Jewish liturgical music. Filmmaker, photographer, musician, bandleader, author and all around klezmer renaissance man, Strom characterizes ancient cantorial chants as the defining 'yidishn ta'am' of klezmer. He then describes a musical changeling that began as religiously inspired folk music and through symbiotic relationships with Rom music and American jazz has kept its core intact while continually reinventing itself.

An annotated 700-year history, previously unpublished photos, newly compiled and translated Holocaust memory book reminiscences, the secret klezmer language revealed, and new musical scores from the author's field recordings enable the scholar and neophyte to gain a better understanding of klezmer's cultural and musical aspects. Strom is at his best in detailing European klezmer from the late 18th century through the Holocaust. He presents a fresh look into this important period by accessing original source material and dovetailing it with informative interviews.

Although U.S. klezmer is presented in less detail, there are highlights for jazz fans; Charlie Parker and Miles Davis trek to the Catskills to hear the great clarinetist Dave Tarras improvise a doina and Bird's trumpet player, Red Rodney, is fired by Tarras for daring to play bop in the middle of a bulgar. Do not expect critical klez-jazz CD reviews or dissections of the latest klez-fusion fads. Instead, musings of downtown musicians on klezmer's past and its future are thoughtfully offered. Strom is commended for including balanced discussions of such touchy genre specific issues as; the Yiddish/Zionist dichotomy, the philo-Semitic klezmer revival in Germany and the continued 'Jewishness' of the music. The Book of Klezmer is recommended for those interested in discovering this music's roots while gaining an eye into its future.