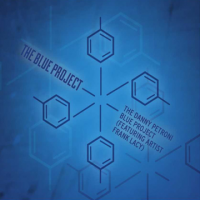 Hurricane Sandy was the second most destructive hurricane in United States history, and when it made landfall in New Jersey in late 2012 it destroyed more than property; it severely affected the community of musicians that made the Jersey Shore their home. In an effort to create some work for them and local producers, guitarist Danny Petroni came up with The Blue Project.

Featuring his own compositions and arrangements, with phenomenal horn arrangements done by the great Frank Lacy, this album is a real treat for fans of electric guitar and jazz-inflected blues. In addition to Petroni's wailing lines, the album showcases Lacy singing with a swagger that could only come from years of living in the pocket; his trombone playing will testify to that, if the vocals aren't proof enough.

The record opens with "I've Seen Everything," an up tempo blues featuring solos from Petroni and Violinist Gary Oleyar. The goofy, playfully sultry lyrics of this song set the tone for the album, as does the swinging horn arrangement. Everything is straight to the point. Very much in the same vein, albeit slowed down a little, "Taste Like Chicken" follows the opener and features more smoking playing from Petroni as well as a short and sweet solo from Lacy.

Changing up the mood, the much more aggressive "God of War" begins with a heavy guitar riff. The straight eighth groove sets this tune apart in a great way. Likewise the following track, "Requiem for the Working Man," stands out from the rest of the album, with its moody arrangement and lyrics. This one features a great solo by Lacy.

Other highlights include the playful "Peanut Butter & Jelly," a slow shuffle which include the lyrics: "When your rhythm section/ Can't find the one/ Don't get upset/ Have yourself some fun." The only solo guitar track, "Diminishing Returns" is a meditative exploration of some very interesting harmonies. The funky closer "Hey You're Looking Good" is a good time and will have you bobbing your head, much like the rest of the album.

Conceived and carried out for a good cause, The Blue Project didn't cut any corners on the music. Every track is a fun listen and the album stays interesting with a wide variety of songs and sounds. Any fan of blues guitar or funky, swinging blues is sure to enjoy this one.

I've Seen Everything; Taste Like Chicken; God of War; Requiem for the Working Man; I Changed My Ways; Cracker Jack; Peanut Butter & Jelly; Mouse in the House; Diminishing Returns; Hey You're Looking Good