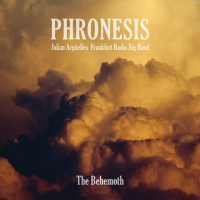 Julian Argüelles needs no lessons on how to arrange for a big band since cutting his teeth with the 1980s jazz phenomenon Loose Tubes, later joining Chris McGregor's legendary Brotherhood Of Breath. He also has recorded over a dozen albums under his name and subsequently leading several line-ups including his latest quartet Tetra. This is the fifth album by the Scandinavian/British band Phronesis since 2010. Argüelles already had history with the Frankfurt Radio Big Band since their joint recording of 2015 Let It Be Told which also featured Argüelles's brother Steve and Django Bates. But as a precursor to this recording, Phronesis and Argüelles appeared together with the Frankfurt Radio Big Band under the aegis of Major Tenth at London's Milton Court concert hall as part of the London Jazz Festival in November 2015.

Anton Eger's polyrhythmic and joyously anthemic "Herne Hill" gleaned from Phronesis's 2014 album Life To Everything is followed by Ivo Neame's gorgeously ornate "Charm Defensive" and "Zieding," penned by Anton Eger, are both from the album Walking Dark (2012). On the latter track Alex Schlosser's gives a scintillating trumpet solo and the piece culminates in a positively mesmeric ensemble crescendo and ends with a stately-paced coda.

Høiby plays a frenetic, jaw-dropping bass solo on Anton Eger's "Urban Control" (also from Life To Everything) and Julian Argüelles follows this with a sinuous tenor solo. The lively closer "Happy Notes" was first heard on Phronesis's 2010 album Alive and is adorned by another superbly fluid Scales guitar solo, suggesting he has picked up the mantle from his late and sadly missed countryman Volker Kriegel.

This multi-faceted major recording by the Høiby-led trio, is augmented by one of the world's hottest big bands. Argüelles's superb arrangements, combined with virtuoso performances all around, contribute to making this a must-hear release.