BY MATTHEW AQUILINE
March 11, 2017
Sign in to view read count 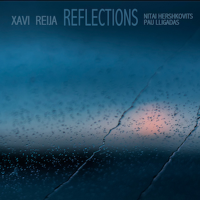 Deviating from his reputation within the realm of boundary-pushing progressive rock/jazz fusion, Catalan drummer and composer Xavi Reija removed the presence of electrified instruments that dominated previous works for an acoustic album that explores the jazz piano trio format. Reflections, his eighth recording as a leader, synthesizes Reija's dynamic authority behind the kit with the lyrical proficiency of bassist Pau Lligadas and the great pianist Nitai Hershkovits (best known for his work with bassist Avishai Cohen). What results is a set of expressive compositions that foster conversational interplay propelled by an attention to rhythmic detail.

Throughout, Reija embodies the adaptability required of a session leader who happens to be a drummer; he perpetuates the equilibrium between subtlety and flashiness, applying both accordingly to assure the ultimate goal of collaborative music. On the album's opener "Martina," Reija exhibits the aforementioned notion with an understated brush pattern that tastefully underpins an airy piano melody—driving the music rather than overwhelming. By contrast, the elaborate hi-hat strikes in 7/4 during the outset of "Capella (We Still Dance)" gives way to dexterous playing that gloriously escalates in effervescence.

The most remarkable feature of this album is the inexhaustible torrent of emotion that surges with each passing composition. A certain song's spectrum of feeling is often hinted with its title, but ultimately discerned through evocative playing that brims with passion. "Childhood Dream" elicits the keen sense of nostalgia and innocence you would expect from its title, emphasizing an exultant melody that unfurls from a wash of cymbals. A standout track, Hershkovits' stately phrasing initiates a pervading aura of pensiveness accentuated through sensitive bass runs and brushwork during the dirgelike ballad "Ausencia." Subsequently, Reija's fluid beat that stresses cross sticking spurs an equally as musing performance on the fittingly titled "Serenity."

As ruminative and introspective as this album is at times, there is still an abundance of moments that cut through with striking potency. "We Keep Walking" is affixed to a thundering groove early on that only becomes more pronounced through prancing snare hits and a spirited piano ostinato. Furthermore, the unpredictable trajectory of "Letter From The Aegean" commences with a sinuous melody that precipitates a lithe piano solo before the brooding timbre of struck tom-toms eclipses any remaining trace of delicateness.

Reflections is a dynamic, imaginative set for a mainly jazz-rock-oriented drummer's foray into the intimate musical environment that is the jazz trio. The short, concise pieces are ideal in showcasing Reija's finesse as an accompanist and leader, and advance his overall prowess as a composer. If you prefer your piano trio with a little extra rhythmic kick, look no further.