The Beatles: Eight Days A Week - The Touring Years

BY DOUG COLLETTE
November 20, 2016
Sign in to view read count 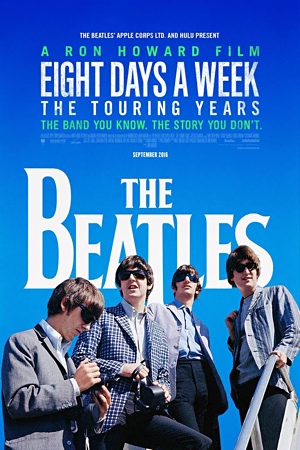 Even with an almost immediately coincidental announcement of home video release in the early fall of 2016, Ron Howard's Eight Days A Week: The Touring Years elicited a response so great on its initially limited theatrical showings, the film compelled subsequent extended runs. And rightly so, for the former TV star and renowned director's film contains a mix of energy, subtle invention and surprise comparable to The Beatles music that inspired it.

In fact, the roughly two hours it takes to watch this movie flies by much like the two minutes-plus performances of the songs the Fab Four were playing during this phase of their career. The filmmaker applies a musician's touch to his work of cinema and whether or not you discovered (and experienced first hand) the emergence of the iconic British band within the 1962-1966 time period the movie covers, the chances are the infectious charm of the music, and Howard's portrayal of its authors on and off-stage, will provide a tangible rush of delight.

In adopting and maintaining a brisk, almost breathless pace in keeping with the evolution of the Beatles' career, Ron Howard doesn't overlook subtle points worth savoring. For instance, his shot of John Lennon and Sir Paul McCartney composing together in a hotel room, a mirror image of the pair with their guitars, speaks volumes about their relationship. And watching Brian Epstein enjoying the music, off to the side of the stage while admiring the crowd in Shea Stadium, is priceless, particularly as McCartney, in a voice-over late in the movie, vouches passionately for the loyalty, devotion and affection extended to the group by their late manager.

With some somewhat circuitous logic, Ron Howard's application of his deceptively detailed approach extends to featuring footage of Beatles' famous rooftop concert of January 1969. As he spotlights the obvious relish in the knowing smiles and grins beaming from these legendary musicians' own faces, the filmmaker restores what may have been only a subliminal recognition of the fundamental attraction of the Beatles: the tremendous degree to which they too loved the music they created and never more so than on stage in the midst of playing it.

That good-natured pleasure in that experience carries over for much of The Touring Years and as it came to theaters, the sensation was amplified by showing the Beatles' performance segment from the film of their August 1965 appearance at Shea originally filmed for broadcast on the ABC television network. In the deluxe two-disc packages on DVD and Blu Ray, however, this half hour of almost pure excitement (on the part of viewers, the stadium audience and the Beatles themselves-see George Harrison gaze around in awe) is supplanted by a hundred minutes of additional content comprised of a handful of full length performance clips as well as insightful mini-documentaries on subjects alluded to, but not really analyzed, during the movie proper.

Focusing on the early Beatles' time in German clubs, the Cavern in their native Liverpool as well as the creative impulses the group brought to bear in the recording studio (mentored by their late producer, Sir George Martin), these segments formulate something of a corollary history of the group, especially as the travelogues covering the Beatles' trips to such (at the time) exotic locales as Australia and Japan (the first pop event at Budokan to the dismay of some)serves as a metaphor for the extent of their global cultural influence

The second disc of these sets also features an alternative opening for Eight Days A Week that reaffirms the creative depth in Ron Howard's film. He proclaims as much himself in his essay in the sixty-four page booklet of photos and other prose (a virtual play by play of the film by Jan Savage), the sum of which video and printed content, stylish as it is, might well pique the curiosity of those otherwise disinterested in the Beatles. Which may be exactly the point: Howard's labor of love is worth seeing and owning for repeated viewings and close inspection precisely because certain facets of the quartet's groundbreaking efforts, such as the shoddy sound quality at their inaugural stadium shows, isn't immediately and readily apparent; the judicious insertion of interview snippets throughout The Touring Years-on this specific issue in the form of comments by Elvis Costello and Ringo Starr himself-illuminates their significance of these topics as much for those mildly curious as for those who grew up on the band.

Ron Howard's real achievement with this cinematic labor of love is the means by which he so brilliant forges entertainment and enlightenment, a fusion comparable to, if not exactly equal to, the sound that moved him so deeply roughly half a century ago.