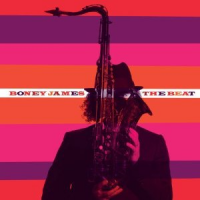 In the crowded field of 50,000 smooth jazz saxophones, only a handful are blessed with a distinctive sound of their own and if Boney James isn't first in his class he should be high on the list. James can play with both raw power and gentle, soulful restraint. There's more restraint than power on The Beat, the 14th album by the New York-born saxophonist, but James has always opted for underplaying a bit than roof-raising soloing.

James' background in soul music playing keyboards and sax for Morris Day, the Isley Brothers, and Bobby Caldwell has weighed heavily in his fondness for R'n'B and hip-hop, but The Beat drops a few hints of his love of Latin rhythms as well best evidenced in a laconic version of Stevie Wonder's "Don't You Worry About A Thing" and on the boppish "Batucada (The Beat)" where James works out with his frequent collaborator, trumpeter Rick Braun. Though they won't remind anyone of Miles Davis and John Coltrane, the James and Braun pairings tend to bring out the most purely "jazz" moments in each other.

It wouldn't be a Boney James record without a few guest vocalists dropping by and The Beat is no exception with three; "Missing You" featuring guitarist Jarius Mozee and Abi Mancha's nicely understated whisper, "Maker of Love" gives Raheem DeVaughn an opportunity to give praise to an attractive lady's attributes, and Natalie "The Floacist" Stewart gives the gents equal time on "The Midas (This Is Why)."

If you aren't already a member of Team Boney, The Beat may not be the release to get you to sign up. For the faithful who helped propel the album to the top of the charts James remains a formidable force in contemporary jazz, standing at the top and giving his competition an even steeper hill to climb.

Don’t You Worry About A Thing; Sunset Boulevard; Missing You; Batucada (The Beat); Maker of Love; Mari’s Song; Powerhouse; The Midas (This Is Why); Acalento (Lullaby); You Can Count On Me