The Band: Pioneers of American Music by Craig Harris 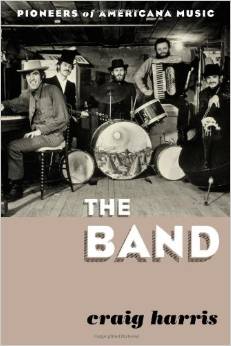 It is difficult, if not impossible or unadvisable, to consider Bob Dylan and The Band separately. Theirs was an artistic event horizon that changed much of music afterwards. Writer and percussionist Craig Harris has lovingly committed to pixels The Band: Pioneers of American Music, the thoroughly researched and considered story of the Band, and necessarily, its relationship with Dylan. In doing so, he gives a succinct history of the surrounding aural terrain: Arkansas Delta Blues, singer Ronnie Hawkins, late-1950s' territory bands, Dylan's 1965 electric-acoustic schism, the rise of FM AOR (album-oriented rock) dominance in the early 1970s and essential ephemera like that.

Harris' writing style is very user friendly. While his in-text references are voluminous, they never get in the way of the writing or the story he tells. Neither does his impressive research ever bog down the reading. He has honed his story to the bare essentials and in doing so, show the bright gleam of that brief decade that defined and then changed so much of American popular music. Harris details the formation of the Band, fist as the Hawks backing up Ronnie Hawkins, then lead by Levon Helm, then backing up Bob Dylan in the '60s and remaining close-by Dylan following his motorcycle accident, during which time, the Basement Tapes were realized, downstairs in Big Pink.

A powerful mystique surrounds the recording of Music From Big Pink (Capitol, 1968), The Band (Capitol, 1969) and what would become The Basement Tapes (Columbia, 1975). The creative period was characterized by isolation and recuperation of not just Dylan after his fateful motorcycle accident, but a boating mishap with Rick Danko, resulting in a broken neck, and Garth Hudson's recovery from burns sustained in a grilling accident. The band became reclusive and resistant to touring and performing live. It was a period of intense incubation and creativity that resulted in arguably the most important music to define and then come out of "Americana."

There exists a second period of creative mystique surrounding the release of Dylan and the Band's ill-received Planet Waves (Asylum, 1974), the 1974 North American tour that resulted in the epic Before the Flood (Asylum, 1974), and the release of The Basement Tapes. Dylan had not toured in several years and was currently in a pissing contest with Columbia Records after he signed with David Geffin's Asylum Records. Eventually, Dylan returned to Columbia, who then took to releasing his two Asylum recordings.

When the 1974 tour concluded that September, Dylan's marriage to Sara Lownds unraveled, eventually resulting in Dylan's most perfect recording Blood on the Tracks (Columbia, 1975). Dylan's marriage was not the only thing falling apart. The Band began to buckle under the strain of creative differences, personality clashes, and fame, all detailed empathetically by Harris, as well as, the post-breakup reunions and the deaths of Manuel (1986), Danko (1999), and, finally, Helm in 2012, finishing the temporal existence of the finest vocal line-up rock music ever produced. The importance of the band cannot be overstated and Harris' taut account does the band proper justice.