The B-52s at The Space at Westbury 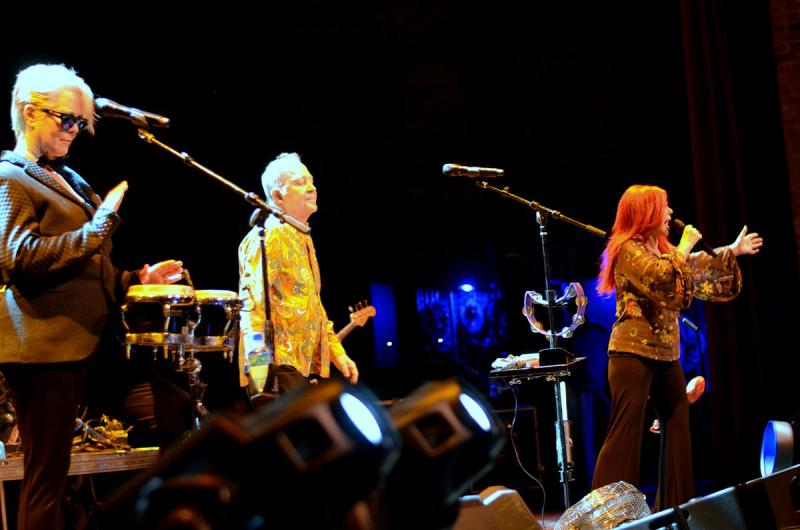 Named after Southern slang for exaggerated "bouffant" hairdos (not the war planes), the B-52s bill themselves as "The World's Greatest Party Band." The party atmosphere was amped up to eleven on this cold Friday evening in late January as Kate Pierson, Cindy Wilson and the inimitable, quirky one-of-a-kind frontman, Fred Schneider. With former staff members of the "World Famous WLIR" radio station in attendance (a dance party was scheduled in the venue following the concert), and an introduction by Sirius XM satellite radio First Wave disc jockey Larry The Duck (formerly the drive-time jock on WLIR), the B-52s came out swinging.

The band wasted no time, opening with "Pump" from the group's last studio effort, Funplex (Astralwerks, 2008), followed by "Mesopotamia" from the 1982 Warner Bros. EP of the same name and the performance of the evening's first big hit, "Private Idaho." The band treated the mostly middle-aged crowd in the packed-to-the-gills venue to exactly what they came for—an opportunity to let its hair down and, for lack of a better phrase, "Dance This Mess Around" (which coincidently made an appearance early in the band's set list). The trio along with its amazing backing band performed a fourteen song set two encores that included hits from all facets of its career: "Girl From Ipanema Goes To Greenland" from Bouncing Off The Satellites (Warner Brothers, 1986) with lead vocals by Wilson; "Roam" and the first set ending "Love Shack" which, of course, featured Wilson's "Tin roof! RUSTED!" ad-lib, from Cosmic Thing (Reprise, 1989); "Legal Tender" from Whammy! (Warner Brothers, 1983); "Party Out Of Bounds" with it opening salvo of "SURRRPRIIIIIIZE!" (as well as "Private Idaho") from 1980's Wild Planet (Warner Bros.); "Is That You, Modine?" from Good Stuff (Reprise, 1992) and numerous hits from its self-titled 1979 Warner Brothers debut ("6060-842" and "Lava" plus the encores "Planet Claire" and the band's biggest hit, "Rock Lobster").

The performance was punctuated by songs all of which featured an infectious danceable back beat, Schneider's pithy one-liners delivered with a sly smile on his face and a twinkle in his eyes, Pierson's outrageous dance moves (most notable on "Mesopotamia") and Wilson's one-of-a-kind vocals.

The walls were sweating, the dance floor was crowded, the audience members were delirious as they bopped to the beat and both the band and its fans were given the opportunity to groove and rock out to an evening of energetic bouncy and energized post-punk rock and pop. A good time was had by all. The World's Greatest Party Band definitely provided the soundtrack to an amazing party—a party out of bounds.