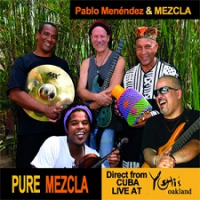 The music of the United States and Cuba are forever comingled in jazz. Rarely have two cultures proven so simpatico than in music, each benefiting from the other. Political normalization of relations between the two neighbors is long overdue and music remains the most potent cultural element than can be shared and exchanged. That is why this live recording by Pablo Menendez and his fine outfit, Mezcla at Oakland's Yoshi's is so special. The symbiotic, indeed, synergistic, relationship between the each native music is amply demonstrated.

To be sure, this is music of more humid climes, borne in sweat and exertion, joy and exuberance. Menendez's chameleon guitar playing across the dozen pieces making up this set is like a generous sampler of fine rums: all full of sweetness and fire. Julio Valdes' violin provides a bit of traditional taste, like Menendez's guitar, a shape shifter. Also, this is kinetic music, the music of movement. This is ensured by the drum tight percussion provided by Roberto Smith and Octavio Rodriguez. This is the heart of the Cuman sound and there is no sound without the beat.

The band opens with Chucho Valdes' delicate and lattice-like "Mambo influenciado." Menendez plays with a full- noted jazz assertiveness. He adopts a broader and fatter overdriven tone for his driving original composition "Hijos de la mezcla." Amidst all of this virtuosity is an almost novelty performance of Irving Berlin's "I'll See You in C.U.B.A. It is a jarring juxtaposition of this 1920s' Tin Pan Alley confection among the remaining contemporary Cubano-jazz. It is like Eric Clapton performing Robert Johnson's "Their Red Hot" in the middle of a Cream recital. Valdez's violin lends a stabilizing authenticity to the piece that gives way to something much more progressive in "Suzi's Mood."

Thelonious Monk's. "'Round Midnight" is remade in a Cuban image, propelled by insistent percussion and its own velocity. Menendez saves his most corrosive guitar playing for his solo turn. Pure Mezcla: Direct from Cuba— Live at Yoshi's Oakland is a heated exchange between friends who are passionate about their positions. Everyone remains friends, but individual points are made. Rare and beautiful music.