By Eyal Hareuveni
April 1, 2009
Sign in to view read count 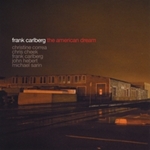 The poetry of Robert Creeley (1926-2005) has been arranged a few times in jazz settings and acknowledges the music's strong influence on his work. The late saxophonist Steve Lacy arranged the introspective and laconic verses of Creeley into an almost operatic setting in Futurities (Hat Hut, 1985) and later on The Beat Suite (Universal, 2003). In a more modest and down to earth vein, electric bassist Steve Swallow, who was also fascinated by the crystalline poetry of Creeley, first arranged his poems for vocalist Sheila Jordan on Home (ECM, 1980). But his collaborative projects with Creeley himself on Have We Told You All You'd Thought To Know? (Cuneiform, 2001) and especially on So There (XtraWATT/ECM, 2006), recorded before Creeley's passing, offered a better and more intimate insight of the reserved poet.

Carlberg's imaginative arrangements, done with the blessing and encouragement of Creeley's wife Penelope, belong more to the Lacy's school of interpretations in the playful and often intense manner in which they extend and enhance Creeley's male perspective. Linguistic economy and emotional direct candor are expressed through impressive readings that add a justified pathos and passion to poems that are seemingly absent of extraneous sentiment. But Carlberg's arrangements differ in their clear reference to the American free-bop jazz heritage—emphasizing Correa's vocals in the tradition of singer Jeanne Lee, but never attempting to indulge in bop onomatopoeia—rather than the modern European jazz arrangements of Lacy, who stressed the operatic vocals of his wife Aeby.

Carlberg's inventive recreation of these poems covers all aspects of Creeley's writing, from the whimsical opening of "We Get Crazy" and the emphatic lament of Marilyn Monroe in "Names," to virtuosic word play on "Time" and the disillusion of the American dream in the title poem and concluding anti-war verse, "If Ever There Is." His sympathetic and almost telepathic interplay with Correa—who charges these poems with her sensual vocals but also alternates with casual delivery—is simply arresting. His trusty and tight interplay with all the musicians turns this suite into a masterful feast of music that suggests a beautiful portrait of Creeley's poetry—joyous, reflective, plaintive, hopeful, and always radiating with great humanity.

We Get Crazy; Speech; Names; "There..."; The American Dream; Loop; Echo I; Sentences; Time; Echo II; Be At That; If Ever There Is.