By Ernest Barteldes
July 12, 2006
Sign in to view read count 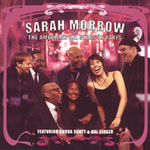 "The new album, said Sarah Morrow as she introduced "Simone at a recent concert at Iridium, "is a collection of American standards that connect with French listeners. She should know; the trombonist has been a resident of Paris for a number of years now.

The album opens with a New Orleans-tinged rendition of the Mercer/Elfman hit "And The Angels Sing, showcasing the chemistry of Morrow and saxophonist Hal Singer. There is more space for improvisation on the up-tempo blues "All Star Boogie, a tune composed by Morrow, featuring the clever work of Rhoda Scott on B3. "Blue Monk morphs into something you might hear along the waters of the Mississippi.

Cole Porter, who started his songwriting career in Paris, is remembered here with "Love For Sale. Morrow and arranger Gary Carney made the bold decision not to play it in a sad, slow tempo, choosing instead to approach it in a more cheerful manner. As a result, the song is almost unrecognizable at first and takes a few more bars to be fully appreciated.

"You've Changed was immortalized by Billie Holiday, and her sad, worn-out voice was one of its most poignant features. Morrow translates that feeling to her instrument, echoing the pain that Holiday brought to the tune almost fifty years ago.

When Morrow played at Iridium last month, the setup was quite different, with only a few songs from the album. Backed by Bobby Floyd (piano), Peter Giron (bass) and Steve Williams (drums), she opted instead to present a mix of standards and original songs, including some that haven't been committed to record yet. Among them were "Original Intentions, "Well, You Needn't (played with a syncopated, reggae-like feel that gave the musicians a lot of room to play around in), "Blue Monk and the funk-based "Impressions of An Obsession, which gave a chance for the band to explore its more playful side.

And The Angels Sing; All Star Boogie; Blue Monk; Worksong; You've Changed; Sweet and Lovely; Simone; Love for Sale; I got It Bad And That Ain't Good; Honeysuckle Blues.