BY DOUG COLLETTE
April 4, 2015
Sign in to view read count 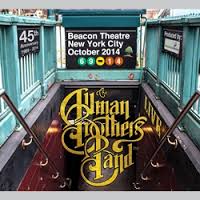 The most stirring moments of the Allman Brothers Band's concert recording from New York City's Beacon Theatre on October 28, 2014 occur near the end of its nearly four-hour performance—not surprisingly, within a rendition of the group's signature instrumental, "Mountain Jam"—that are as emphatic as they are mellifluous. The patient but rabid audience offers instant recognition of the instrumental introduction to "Will the Circle Be Unbroken," after which the intonation in Gregg Allman's voice, as he begins to sing, triggers a flood of emotion, the moving likes of which has been curiously absent from this—perhaps the last concert ever by this iconic Southern ensemble.

Over the course of the prior three-plus hours contained on four CDs, the group smolders continuously and threatens to catch fire as it offers virtually every tune a fan would want to hear from its repertoire—except, perhaps, Dickey Betts' glorious instrumental "Jessica," as conspicuous by its absence as its author. Yet curiously—or perhaps not—those moments the septet comes closest to bursting into flame are not standards like "Dreams," "Don't Keep Me Wonderin'" or "Ain't Wastin' Time No More"; rather, it's a jam on the Grateful Dead's "The Other One," as the coda of "Black Hearted Woman," that stretches the whole group as much as it does Warren Haynes and Derek Trucks, the two guitarists reaching upward in their spiraling interplay near the end of co-founding guitarist Betts' other famous tune, "Blue Sky," which, in its mention of "Goin' to Carolina," clearly carries meaning for Haynes, the native son and leader of Gov't Mule.

In a very real way, this final ABB concert is an eerily accurate mirror image of this group's time together. Played at co-founding guitarist Duane Allman aka Skydog's 1971 funeral by the surviving five ABB members—and explored on previous nights during this second and final Beacon run of 2014—no doubt brought home the truth of the occasion to all seven musicians onstage and, in turn, explains why and how the final numbers played reflect their feelings about their shared career and these moments of closure.

The near-silences within this "Whipping Post" point up its otherwise white-hot frenzy, with Haynes and Trucks a collective reminder as to why the main attraction of ABB shows in its later years was the sublime opportunity to watch and hear them complement each other in such uncanny ways. In its own way, this contemporary blues carries more than a little autobiographical meaning for them and, perhaps even more so, the final selection, "Trouble No More"—introduced by the band's only remaining namesake, Gregg Allman, as the very first song the original Allman Brothers ever played together.

Speculation on the the source of abandon in this performance of Muddy Waters' song is less important than the palpable sensation of personal exorcism as Allman caterwauls his vocal as if he wrote the words, the Haynes/Trucks fretboard axis redefining the concept of "slash and burn" and the rhythm section showcasing an intricacy often lost in later years (despite a minor stumble at the breakdown). Often creating an on-stage ambiance, a plush sound mix here allows Oteil Burbridge's bass a prominence—and Butch Trucks, Jaimoe and Marc Quiñones' percussion a presence—it didn't always receive within the confines of the venue. At the same time, its uniform clarity belies the package's stylized artwork that carries no distinction of the profundity of this occasion (merely an essay on the show from the ABB merch site would suffice?)

But, then, published (see Alan Paul's book, One Way Out (St. Martin's Lress), released in both hard and softcover in early 2014) and unpublished accounts of friction and frustration within the ABB ranks across its 45 years of existence also manifests itself in their business operations, including slipshod archiving more egregious than this. Yet it's during moments such as these that the Allman Brothers Band's playing renders such factors inconsequential. And if the previous months of the 2014 tour didn't allow for a truly triumphant climax to one of the most influential careers in contemporary blues rock, this final thirty minutes, taking place early in the morning of the anniversary of their founding father's tragic demise, delivers a more fitting finality than the band might have otherwise devised.