BY DOUG COLLETTE
January 17, 2016
Sign in to view read count 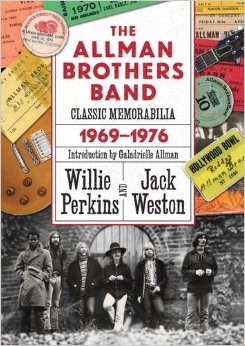 Galadrielle Allman, the daughter of the late founder of The Allman Brothers Band Duane "Skydog' Allman, wrote the best book on the seminal Southern Rock band, Please Be With Me: A Song for My Father, Duane Allman (Spiegel & Grau, 2014), so it only stands to reason she would be ideal to offer an introduction to Classic Memorabilia. Almost equally qualified is Willie Perkins, the former (road) manager of the Dixie rockers, himself the author of No Saints, No Saviors (Mercer University Press, 2005), an unapologetically unadorned collection of tales set early in their existence. Together, Allman and Perkins put the herculean efforts of fan and collector Jack Weston into the best possible context as the foundation of this book.

The latter in particular deserves the role of co-author of this softcover and not just because he can validate the authenticity of the equipment, the paraphernalia and the various legal documents (not to mention the overall historical perspective of the band he once oversaw). He informs the content he writes with a practical business orientation that Weston extends as a professional collector. As a result, their alternating text entries throughout the eleven chapters formulate a scholarly approach to this endeavor it might not otherwise contain.

Given that the subtitle of Classic Memorabilia, '1969-1976,' coincides with the end of the two initial eras of the ABB-the original lineup founded by guitarist Duane Allman and the ensemble including pianist Chuck Leavell and bassist Lamar Williams of Brothers and Sisters (Capricorn, 1973) yore-this tome may be the first of a series. In that light, the sequencing of the book seems less arbitrary, beginning with chapters devoted first to equipment and then to the promotional items that were a direct outgrowth of the ABB's burgeoning success. Ultimately, that logic mirrors the group's attitude toward its work in that they generally eschewed the show business aspects of their career.

As tempting as it is to shortcut directly to the chapter titled "PHOTOS," that's a mistake as it's a surprisingly compact collection, the rarity of the shots far outweighing their number. Of course, such cosmetic aspects of the Brothers' were not emphasized then or now, so that may explain why there are no references to how latter-day designs of t-shirts and stickers, for instance, draw on the templates of the Seventies (and might have benefited from such sourcing by the organization and the larger Allman Brothers community in later years).

Numerous credits to once and future archvist and photographer Kirk West appear throughout this book, begging the question if his work over years might've benefited The Allman Brothers Band Classic Memorabilia by tying the group's musical evolution more closely to the book. It seems odd too, that so few references to The Big House Museum (that West by and large curated)appear here either, but that makes sense if in fact this is the first installment of an ongoing initiative.

While the Allman Brothers Band may not be, as author and de facto publicist Alan Paul states in his blurb, "American's greatest band," their on-and-off history over forty-five years, is certainly colorful enough to warrant such a long-term episodic chronicle, particularly if the themes introduced here are expanded upon in future editions.