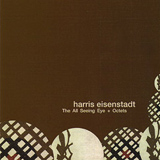 Recently relocating from Los Angeles to New York City, percussionist Harris Eisenstadt is becoming a ubiquitous presence in the bi-coastal creative improvised music scene. Wadada Leo Smith, Sam Rivers, Bobby Bradford, Jeb Bishop, Rob Brown, Vinny Golia and a cast of notables have all utilized his skills in the past. The All Seeing Eye + Octets is his sixth album as a leader and the culmination of his West Coast-based artistic achievement.

Altering the timbre and tone of the original 1965 session by re-organizing the instrumental palette, Eisenstadt employs a richly hued woodwind trio in lieu of Shorter's low brass and saxophones. The plangent bassoon of Sara Schoenbeck mingles with the caterwauling clarinets of Andrew Plask and Brian Walsh as they soar where the original line-up churned, blending fervent expressionism with lyrical precision.

Eisenstadt adds lift to the ensemble by replacing the traditional chordal safety net of the piano with the spare airiness of Chris Dingman's kaleidoscopic vibraphone. Interwoven with the lyrical refrains of Daniel Rosenbloom's trumpet, they cast a brilliant metallic sheen over to the octet's resonant, woody timbre. Driving the group with graceful fluidity, bassist Scott Walton and the leader maintain the pacing of the original album, driving the octet through brisk tempos and dreamy ballads.

Originally conceived for an ensemble at least twice the size, "What We Were Told" and "Without Roots" are given animated performances by the stripped down octet. Occupying the second half of the record, these long-form compositions integrate Western Classicism with shades of Copeland, Ives and Ligeti punctuated by knotty interjections of blistering free-bop and lilting African folk melodies.

Avoiding typical Third Stream pitfalls, the octet eschews the studiously cerebral for the lyrically direct. Blending melodic kernels of euphonious depth with intricate counterpoint and dense harmonic voicings, Eisenstadt's writing resonates with singular clarity. The All Seeing Eye + Octets presents a vision of the future cast through the lens of the past.