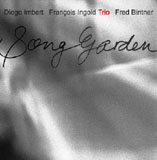 Ingold is joined by French bassist Diego Imbert and drummer Fred Binter. The brand of piano trio music is from the school of Bill Evans to be sure, but at the same time is pretty well advanced from it. "Black Trombone and "Children Song 'to Denis' each open quietly, displaying a capability for Evans-LaFaro-Motian intimacy, but also possessing something beyond that. Binter's unique use of percussion elements on "Children Song, along with extremely high register meandering by Imbert, gives the song a very modern impressionistic texture. Immediately following this introversion is a jaunty but subdued island vide, "Première Dent, that has Imbert soloing with harsh assertiveness before returning to his rounded support tone. Binter turns in what can only be termed an impressionistic drum solo; quiet, living in the cymbals.

Ingold is inventive without flying out into the freedom desert. Harmony is Ingold's touchstone and he remains close always to the root. He is not prone to dissonance, preferring tidy harmonic beginnings and endings. The Cure's "A Forest is, perhaps, the most experimental piece on the disc in its introduction but quickly settles into a modern standards groove with Ingold's three-phased left hand figures and percussive treatment of the chorus. "Love Song is introduced as a fractured lullaby onto which Imbert's aggressive bass playing is laid, accomplishing a neat bit of duet interaction between pianist and bassist. Binter is so organic in his approach that the listener barely notices his entrances and exits.

Song Garden is finely recorded with pristine sonics and judicious placement of instruments in the mix depending on the piece and the pace of play. We are fortunate to have such splendid music to enjoy.