Elan Mehler: The After Suite 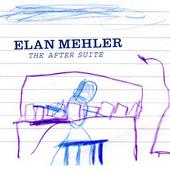 This achingly beautiful, elegant album is only the second from Brooklyn-based pianist and composer Elan Mehler, being the follow-up to his debut, Scheme For Thought (Brownswood, 2007), another quietly sensational disc. If it might have seemed rather too breathless to have hailed a debut as a masterpiece, the temptation cannot be resisted second time out. The After Suite is a masterpiece with a capital "M."

A dreamy, spacious, alternating current of poignancy and joy, Mehler's writing and playing has changed not at all over these two albums, though he's expanded his band's lineup. Scheme For Thought was made by a drummer-less quartet—piano, Fender Rhodes (sparingly employed, as it is on the new album), tenor saxophone and bass. The After Suite retains those instruments (though only bassist Tod Hedrick of their players) and adds drums. These give the music a stronger pulse, and more obvious jazz provenance, than was apparent on the debut album, which had some enthusiasts reaching for classical analogies. "The 54th Leap," for instance, as the title suggests, has the swinging, percussive vigor of Paul Desmond's "Take Five." Vocalists Becca Stevens and Adam McBride-Smith are also featured, between them singing on eight of the 11 tracks, sometimes with lyrics, sometimes wordlessly.

Six of the tunes are Mehler originals, and were written, he says, after "a life-changing breakup." Indeed, it's hard to imagine music this affective being produced without some preceding trauma and catharsis. Two further tunes are collaborations, another is by McBride-Smith, another is a traditional Hebrew hymn, and the eleventh, "I Dream A Highway," is by alt-country artist Gillian Welch, whose "Elvis Presley Blues" was the sole non-original on Scheme For Thought. Welch's writing is winning admirers amongst jazz musicians, and Mehler is one of a small number of jazz composers who can consistently match her note for gorgeous note.

On The After Suite, Mehler's delicately rhapsodic piano playing is as much concerned with collective performance as it is with soloing, which is shared with saxophonist Jeremy Viner. With material as top drawer as that to hand, all Mehler would really have to do is embellish the themes a little, and we'd all still go home happy. But he digs deeper than that. Viner is another substantial voice, most often dreamily noir and school-of-Lester Young-ish, but on occasion sinewy and hot.

Still a cult figure, most of Mehler's breaks have so far come in Europe. London label Brownswood's owner, Gilles Peterson, best known in the UK as a jazz/funk DJ, chanced upon Mehler playing solo piano in a Swiss hotel some three years ago, and was entranced. A short, limited edition disc released by Brownswood started a buzz, and Scheme For Thought built upon it. By the autumn of 2007, Mehler was selling out at London's sharpest jazz club, The Vortex (the room is indeed small, but the queue was disproportionately long).

The After Suite deserves to take Mehler's reputation further still. Albums this special come along only rarely.