By IAN PATTERSON
February 8, 2014
Sign in to view read count 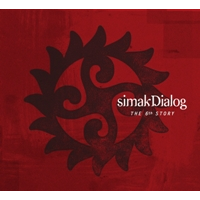 The title, simple yet enigmatic, hints at the epic tale that is SimakDialog—the Indonesian prog-jazz band formed by keyboard player Riza Arshad in 1993. The band's international debut Patahan (MoonJune Records, 2007) served as a global calling card, with critics referencing jazz-fusion influences such as trumpeter Miles Davis, keyboardists Chick Corea and Joe Zawinul, The Pat Metheny Group et al. The foundation of the music, however, has always been the hypnotic Sundanese gamelan rhythms and this meeting between ritual/folkloric grooves and more jazz-centric lines from Arshad and electric guitarist Tohpati also largely defines The 6th Story.

Four years on from Demi Masa (MoonJune Records, 2009), the twin percussion unit of kendang drummers Endang Ramdan and Erlan Suwardana is joined by Cucu Kurnia, whose assorted metal percussion ever so subtly spices the constant rhythmic flow. Bassist Adhitya Pratama anchors the sextet with slow-funk pulses that rarely quicken—an understated yet essential element of SimakDialog's collective sound. Most of the tunes boast fine melodies, introduced by Arshad and Tohpati in tight unison lines that navigate quirky meters before one then the other solos. The main exception is the altogether looser "Harmologic," where Arshad and Tohpati improvise simultaneously, seeming to push and pull each other in separate yet overlapping fields of gravity.

The episodic "Stepping In" moves swiftly from the head to a chain of keyboard/guitar-led melodic developments. When Tohpati drops out the intensity wanes, freeing Arshad, who inhabits the new-found space with a delightful sinewy run. The guitarist's queue to rejoin signals a psychedelic passage that soon gives way to clearer, more cutting guitar lines. All the while the percussion cooks, never wavering. The head reappears and a final flash of unified melody ends this visceral and cerebral feast with a pronounced sense of drama.

The melodic and improvisational aesthetic is not a million miles from bebop. Certainly, the knotty melodic contours and freewheeling solos of "Lain Parantina" and "Common League" will resonate with jazz fans and those more inclined towards contemporary progressive rock/fusion. On the former, Arshad and Tohpati are fired-up, spurred on by the percussion. The collective sound rises and swells but just when it seems set to peak in dramatic fashion the music recedes to gentler pastures, though not without a final exclamative flourish. The latter tune—at just under four minutes—ends as the coals are beginning to glow.

There's a more meditative and overtly lyrical side to simakDialog, evidenced in the seductive melody of "What Would I Say"; Arshad and Tohpati's measured solos are emotionally charged. It's a winning tune evocative of the best moments of guitarist Al Di Meola's early solo recordings. "As Far as it Can Be (Jaco)" is a nuanced slower number, blue-toned and lyrical. Greater rhythmic impetus colors "For Once and Never"—whose heroic motif is unforgettable—and "5,6," where bass/keyboard vamps and spacey soundscapes underpin Tohpati's rockier solo. Arshad combines elegant, flowing acoustic piano with Zawinul-esque synthesizer minimalism on the compelling hybrid "Ari."

Arshad and Tohpati have spent two decades refining SimakDialog's sound and changes in personnel and stylistic variations have been part of that process. The band though has never sounded more organic and The 6th Story's beguiling narratives and striking dynamics represent a highpoint in its discography. Whatever label you might hang on it, Indonesian jazz-fusion, prog-jazz or world/jazz—they all work—this is another unique, intoxicating chapter from master storytellers.

Stepping In; Lain Parantina; Harmologic; What Would I say; For Once And Never; Common League; As Far as it Can Be (Jaco); 5,6; Ari.