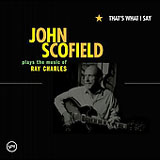 It's usually best to assess a project on its own merits, rather than getting caught up in expectation or preconception. Fans of guitarist John Scofield's more jazz-centric work, including his early-'90s Blue Note work and his recent recording EnRoute, will undoubtedly find the glossy production of That's What I Say disappointing and, well, a little safe. But of all the high-visibility jazz guitarists on today's scene, Scofield is unquestionably best-suited to a project of this nature. While he has the kind of chops and harmonically adventuresome spirit to tackle the most challenging contexts, he's also a deeply soulful guitarist, as much a descendent of B.B. King as Wes Montgomery.

And this is a production. Drummer Steve Jordan—who, along with organist/pianist Larry Goldings and bassist Willie Weeks, makes up the core quartet with Scofield—is also the record's producer. He has pulled out all the stops with a host of guests including singers Mavis Staples, Doctor John, Aaron Neville, Warren Haynes, and, somewhat surprisingly, John Mayer. Also featured: percussionist Manolo Badrena; a four-piece horn section; and an almost kitchen sink approach to sonic ear candy. In fact, this is the closest Scofield has ever come to making an out-and-out pop record.

Still, even on this collection of well-known Charles covers, Scofield manages to inject a degree of unpredictability in his playing. While he stays almost entirely inside the lines, he still demonstrates his characteristically angular approach, and a more unconventional way of navigating the simplest of changes that is especially evident when playing against Warren Haynes' bottleneck guitar on "Night Time is the Right Time or John Mayer's more straightforward rock lines on "I Don't Need No Doctor.

While all the guests contribute to the homage, the least-embellished tunes are the ones that work the best. "Busted finds Scofield, Goldings, and Jordan in fine form updating the organ trio tradition, with a stronger backbeat than anything you'd likely have heard from Jimmy Smith or Jack McDuff. And while it may only last a scant minute and a half, Scofield's duet with Goldings on "Cryin' Time is the most poignant moment on the disc. The funky hidden track that follows the album's closer—a nylon-string guitar solo rendition of "Georgia on My Mind —has the kind of deep and unforced groove that makes you wish Scofield would stick with musicians of this calibre, rather than the more on-top-of-the-beat jamband players in his Uberjam group.

In fact it's the very song-form nature of That's What I Say that, while certainly not for jazz purists, makes it a far more satisfying listen than the more extended jamband aesthetic of Uberjam or Up All Night. Heartfelt and always soulful, That's What I Say could have used a little less production and a little more gut instinct. But despite that, it manages to be both a fun listen and a personal tribute that isn't at all out of place in Scofield's overall body of work.

Visit John Scofield and Verve Records on the web.

Busted; What'd I Say; Sticks and Stones; I Don't Need No Doctor; Cryin' Time; I Can't Stop Loving You; Hit the Road Jack; Talkin' Bout You/I Got a Woman; Unchain My Heart (Part 1); Let's Go Get Stoned; Night Time is the Right Time; You Don't Know Me; Georgia on My Mind