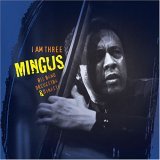 I Am Three, the debut CD on the Sue Mingus Music imprint (distributed as part of Sunnyside's Confluences Series), pays tribute to the late Charles Mingus by bringing together the three principal Mingus repertory bands: Mingus Big Band, Mingus Orchestra and Mingus Dynasty. Although the groups were each recorded separately in October and November of 2004, this is no compilation album; there's a unity of purpose, sound and most importantly, personnel, as all the bands share members such as bassist Boris Kozlov, trombonist Ku-umba Frank Lacy, and altoist Craig Handy.

What we get, then, is three complementary but different views of Mingus's compositions: the Mingus Big Band's well-oiled, expansive voicings, Mingus Orchestra's more eccentric chamber jazz, and the Mingus Dynasty's septet flexibility. All of these groups are long-standing ensembles with a deep familiarity with Mingus's body of work, and on this CD, all the arrangements save those for the Mingus Orchestra (which were created by Sy Johnson) were done by playing members of the bands.

Well and good. Yet one always hesitates to purchase an album by a repertory band; surely the cash would be better spent on another CD by the original artist? I certainly cannot, in this case, declare that the reader should buy I Am Three in place of Mingus Ah Um, Blues & Roots, or The Black Saint and the Sinner Lady—to name only three essential Mingus albums. I can, however, declare in good conscience that the tracks on I Am Three are of a consistently high level of performance and are often downright thrilling. The songs chosen are some of Mingus' best, but mercifully, there's no "Goodbye Pork Pie Hat or "Better Git It in Your Soul here—wonderful though they are. Given the sheer quantity of quality Mingus compositions, it's really time to dig a little deeper into the canon.

Despite the three-way billing, this is in many ways a Mingus Big Band CD, as the Big Band performs six of the album's ten tracks. Ailing Big Band saxophonist John Stubblefield's arrangement for "Song For Orange sticks closely to Mingus's version on his Mingus Dynasty (no relationship to the group) album: it retains Roland Hanna's piano introduction (gorgeously played here by George Colligan) and includes a Conrad Herwig plunger-mute trombone solo (in tribute to Jimmy Knepper's on the original). But in place of the brittleness of Mingus's original, this new version has a wide-open, dense swing that's pretty irresistable; no one can ever take the place of the bass/drums empathy of Mingus and Dannie Richmond, but Kozlov and Johnathan Blake are more than adequate here (as are Kozlov and drummer Donald Edwards on all their tracks together). The swing's so irresistable, and feels so right, that one senses an inclination on the part of some of the soloists to just blow—but the fierce Stubblefield keeps them honest and aware of the song, not just its changes.

Kozlov's arrangement of "Tensions for the Big Band is another marvel. Here the anxious harmonic and rhythmic frictions of Mingus' Blues & Roots recording are amplified and increased for our contemporary situation: certainly 1959 was no American utopia, but certainly none of us feels safer in this millenium. Scott Robinson's baritone sax repeats the song's theme in that unmistakable register, and Abraham Burton contributes a tenor solo that's among the CD's best solo statements.

Mingus Orchestra's two tracks showcase Mingus's more classical leanings, whether it's the jazz-free Mahlerisms of Mingus's first complete composition "The Chill of Death —Michael Rebonowitz's bassoon and Bobby Routch's French horn adding fascinating color to the ensemble harmonies—or the alternating classical and hard-swing passages of "Todo Modo. Mingus Dynasty's "Cell Block F 'Tis Nazi USA is perhaps the CD's most beautiful tune (in this case Mingus added the ominous title after the fact and the music reflects none of its message), with stellar solo contributions from Craig Handy on flute and Ku-Umba Frank Lacy on trombone.

The album's excellence, really, is a product of tight, ensemble performance (a pretty common quality in jazz recordings nowadays) and fiercely emotional commitment on the part of the musicians to the composer's music (something considerably less common). One never gets the impression these players are covering Mingus because it's a gig. And it's this unity of purpose that energizes I Am Three, and makes it much more than just another tribute album. The composer is alive on these recordings.